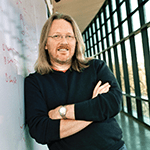 The primary goal of nanomedicine—using materials such as polymer nanoparticles—is to improve clinical outcomes. For example, targeted nanoparticles can be engineered to reduce non-productive distribution while improving diagnostic and therapeutic efficacy. Paradoxically, as the field has matured, the notion of ‘targeting’ has been minimized to the concept of increasing affinity of a nanoparticle for its target, and most applications have focused on intravenous delivery, where this kind of targeting is difficult to achieve. Here, I present examples of alternate approaches, in which nanoparticle design is used to achieve a positive outcome in the treatment of brain tumors, targeted correction of a single-gene disorder, long-lasting, safe prevention of UV-mediated DNA damage in skin, and antibody-mediated targeting of inflamed endothelium. These examples all involve targeted nanoparticles, but with unique designs that guide their biological activity.

W. Mark Saltzman is an engineer and educator. Dr. Saltzman’s research in the fields of drug delivery, biomaterials, nanobiotechnology, and tissue engineering is described in over 250 research papers and 15 patents. He is the author of three textbooks: Biomedical Engineering (Second Edition, 2015), Tissue Engineering (2004), and Drug Delivery (2001).

The grandson of Iowa farmers, Mark Saltzman earned degrees in chemical engineering (B.S. Iowa State University 1981 and M.S. MIT 1984) and medical engineering (Ph.D. MIT 1987). He served on the faculty at Johns Hopkins (1987-1996), Cornell (1996-2002), where he was the first BP Amoco/H. Laurance Fuller Chair, and Yale, where he has been the Goizueta Foundation Professor since 2002. He was named the founding chair of the Yale’s Department of Biomedical Engineering in 2003, and served in that role until 2015.

Dr. Saltzman has been recognized for his excellence in research and teaching. He received the Mines Medal (2014); the Camille and Henry Dreyfus Foundation Teacher-Scholar Award (1990); the Allan C. Davis Medal (1995); the Controlled Release Society Young Investigator Award (1996); and the Professional Progress in Engineering Award from Iowa State University (2000). He has been elected a Fellow of the National Academy of Inventors (2014); Fellow of the American Institute for Medical and Biological Engineering (1997); a Fellow of the Biomedical Engineering Society (2010); a Member of the Connecticut Academy of Science & Engineering (2012); and a Member of the National Academy of Medicine (2014).