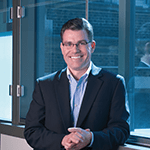 Mechanical forces influence the development, maintenance, and degeneration of the nervous system at many length scales. At the synaptic scale, mechanical forces can play a role in the formation and maintenance of the synapse. One well-studied synaptic receptor, the NMDA receptor (NMDAR), is considered important in regulating neuronal survival during disease or after injury. In this talk, we show the NMDA receptor is mechanosensitive, and this mechanosensitivity is a key aspect that underlies the role of the NMDA receptor in traumatic brain injury. We identify the molecular domains of the NMDA receptor controlling mechanosensitivity, and we use this molecular map to study how local synaptic signaling is modified following NMDAR mechanoactivation. Next, we use simulations of synaptic networks to identify how normal neurotransmission is altered following traumatic brain injury, and use single cell imaging data to identify single-neuron characteristics affecting the signaling and integration of neurons in the network following mechanical injury. Consistent with predictions, results show that the most effective therapeutic approach is not a broad spectrum inhibition of the receptor, but a more targeted approach that stimulates mechanically-sensitive forms of the NMDAR. Ongoing studies to modulate the mechanosensitive properties of the NMDAR in vivo are discussed, with applications to controlling the response of the brain to mechanical trauma.

David Meaney joined the Penn Engineering faculty in 1993 after receiving a bachelor’s degree in Biomedical Engineering from Rensselaer Polytechnic Institute and M.S. and Ph.D. degrees in Bioengineering from the University of Pennsylvania. His current research focuses on understanding the mechanical cues that regulate injury, repair, and growth in cells and tissues of the central nervous system. Applications of the work include understanding the causes and treatments for traumatic brain and spinal cord injury. He holds a secondary appointment in the Department of Neurosurgery within the School of Medicine at Penn. Meaney serves as the chair of the Department of Bioengineering in the School of Engineering and Applied Science.
The author of numerous journal and conference publications, Meaney’s work has appeared in a broad spectrum of venues, including the Proceedings of the National Academy of Sciences, Nature Clinical Neurology, the Journal of Neuroscience, and the Journal of Biomechanical Engineering. He has received numerous awards including the William J. Stickel Gold Award, a National Science Foundation CAREER Award, the John Paul Stapp award, and the Y.C. Fung Young Investigator Award in the field of bioengineering.