As a Master of Applied Bioengineering (MAB) student, Albert Nguyen is working to advance at-home dialysis technology that gives patients an easier option for treating kidney failure. His work builds upon the foundation he got in UW BioE’s undergraduate program, where he discovered a passion for engineering solutions to clinical problems.

Dialysis has saved millions of lives of people living with kidney failure since its introduction in the 1960s, yet innovation in the options available has been limited. For these patients, dialysis is required to perform the jobs kidneys can no longer do, such as removing waste products and toxins from the body. Without dialysis, kidney failure is fatal unless a patient receives a kidney transplant.

Patients commonly decide to undergo clinic-based hemodialysis. Several times a week, they are connected to an “artificial kidney,” or hemodialyzer, which cleans their blood. Each treatment takes a few hours, which requires a rigid schedule with limited flexibility. Home hemodialysis is available, but must be done more frequently and restricts a patient’s independence.

Patients can also choose peritoneal dialysis (PD), a procedure that they can perform at home. In PD, dialysis fluid is introduced to the body via a catheter system implanted into a patient. The fluid absorbs waste products that have filtered across the peritoneum, the membrane that surrounds the kidneys and other abdominal organs, and then the fluid removed from the body. PD is simpler than hemodialysis, and enables patients to work, study and travel with relative ease.

However, patients who choose PD are susceptible to infection. Complex sterile techniques must be followed each time a patient infuses or removes dialysis fluid. Touching or exposing the catheter components to air carries the risk of introducing bacteria to the body.

Albert discovered the issues surrounding PD treatment when approached by Bernadette Thomas, a clinical nephrologist and UW Global Health researcher focusing on the global burden of kidney disease. He saw the opportunity to solve what he saw as a simple problem, and what patients see as a barrier in selecting treatment. “We think that PD is a lot better for the patient,” he says. “But not as many people are doing it despite the fact that it is a lot more convenient.”

To simplify the complex sterile technique for PD, Albert teamed with MAB students Ana Silvera Linares, Purushothaman Padmanabhan, Peipei Liu, Jizhe Sun and Alexandra McCormick to design CathEase. Their system uses an improved catheter and a sealed, sterile device that automatically connects the catheter to the tubing that introduces and removes the dialysis solution. CathEase is designed to minimize the steps involved in sterile technique, reduce infection risk and improve patient outcomes.

Albert believes this simple solution could potentially have a big impact by increasing the appeal of PD. “Patients like to have an expert do it for them,” he explains. “If there’s an infection risk, someone could get seriously sick if they don’t do it right. If we make something that reassures patients that they can do this on their own and control their lives, we will have a huge impact on the kidney disease population.”

A “deep love” for chemistry leads to bioengineering, MAB

A native of Everett, Wash., Albert was drawn to science and engineering from an early age. “Both my parents are engineers, so I had a really strong family background in science.” In high school, he found that he excelled at math and science. “I started with a deep love for chemistry,” he explains. “But I also really like working with biological systems.”

To combine those two interests at UW, he started a major in biochemistry with the intent to apply to medical school, and later added a double major in BioE. Albert soon discovered that he wanted to design and engineer creative health care solutions. “In med school, you have to be really well established on stuff that is already existing. But going into engineering design encourages more creativity, and you get to try something new.”

As part of BioE’s dual research/team design senior capstone, he worked with Research Assistant Professor Anthony Convertine on drug delivery research. He eventually realized he wanted to go in a direction where he could make a more immediate impact on clinical care.

For the team design part of capstone, he worked on a team advised by Nathan White of Harborview Medical Center. The team built and tested a device to detect fibrinogen, a protein that helps form blood clots, for diagnosis of trauma-induced coagulopathy in emergency medicine. During this project, he realized that he enjoyed working with clinicians to identify and solve problems, and applying to the MAB was a natural next step. “It felt perfect because it was that same concept, but over a longer period of time. We can better develop a project, and pitch it to businesses.”

Reflecting upon his decision to enter the BioE major, Albert says he was attracted to the close-knit community, and diversity of projects and resources available to students. “In my undergraduate cohort, we had about 60 people and everybody knew each other’s names. In MAB, it’s even smaller – 13 students.” As he continued with the MAB, he found the program be highly relevant to his plans to pursue a career in industry. “With other classes, you’re learning about something, and you’re always thinking, when am I going to be able to use this? In MAB, we’re thinking we can use this. I’m doing something that could potentially affect people, and I will be able to see it. That’s really exciting.” 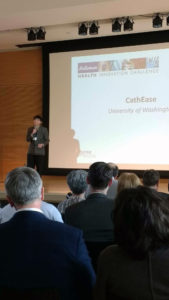 MAB’s focus on entrepreneurship is especially helpful for students planning to pursue careers in industry, Albert says.  The curriculum covers patents and licensing, and student teams are encouraged to enter their capstone projects into UW’s business plan competitions. Albert and his team were finalists at 2017’s Holloman Health Innovation Challenge, and entered CathEase into the 2017 UW Business Plan Competition.

Outside of his coursework and work on CathEase, Albert is the lead chemistry tutor at CLUE, a multidisciplinary study center at UW. He started working at CLUE when he was an undergraduate, and decided to continue when he entered the MAB. He says his favorite part of the job is watching students develop over time, and particularly enjoys working with freshmen. “They start asking really basic questions, but over time but over time they gradually start asking better and better ones. Eventually, they ask questions I don’t know the answers to.” A former Eagle Scout, Albert also volunteers as a chemistry merit badge tutor with the Boy Scouts of America.

As he finishes his MAB degree, Albert will travel to Germany as a recipient of a DAAD-RISE Professional internship. The DAAD-RISE Professional program matches North American master’s degree students with internship opportunities in German companies and with research institutions connected to industry. Albert will work in the cleaning supplies division of the chemical company BASF to stabilize formulations for biological components.

Following his internship, Albert plans to work in Seattle’s biotech industry. He is interested in companies developing diagnostics and external medical devices, and hopes to find a position focused on project planning. One day, he sees himself working in a management role, possibly as a chief technology officer. “I envision myself leading scientists and technical staff to determine the best course of action,” he explains. “I can see asking: how do we maximize success, and how do we make a plan for the next few months or years for what our design or product needs to do?”