Nuttada is the first UW recipient of an APF Student Technology Prize. This summer, she and fellow Lutz lab member Rahil Jain, a fifth year electrical engineering Ph.D. student, were among 10 finalists to be considered for the competition’s first, second and third place prizes. As finalists, they both received $10,000 to advance their projects and prepare their final proposals.

Nuttada is developing OLA-SIMPLE, a paper-based system that emulates the diagnostic capabilities of laboratory testing to provide a rapid visual readout of HIV diagnosis, viral load and drug resistance. The device is designed to address the increasing prevalence of HIV resistant to antiretroviral therapy (ART) in low-resource regions, such as in sub-Saharan Africa and Asia.

In developed countries like the United States, HIV-positive patients are routinely tested for resistance to ART before being prescribed treatment. However, at a cost of $200 to $700 per patient, this type of testing is out of reach in the developing world. It also requires sophisticated lab facilities, which are often not available in poorer regions. Lack of access to drug resistance testing often results in patients being prescribed the wrong type of ART, which can lead to treatment failure. Improper treatment of HIV undermines efforts to control the disease worldwide by creating opportunities for new HIV strains resistant to all ART to emerge. 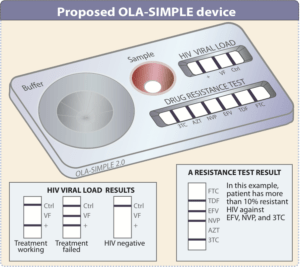 OLA-SIMPLE aims to become the first instrument-free device that offers HIV diagnosis, and detection of drug resistance and viral load at the point of care. The device is based on Nuttada’s previous work to simplify a laboratory-based oligonucleotide ligation assay (OLA), pioneered by her clinical collaborators Dr. Lisa Frenkel and Ingrid Beck of Seattle Children’s Research Institute. Compared with the expensive assays typically used in developed countries, OLA offers an increased sensitivity to detect low viral load HIV, at a reduced cost per test. However, OLA’s complexity – several steps are involved that still require lab equipment, and take hours to complete – make it impractical for areas with fewer resources.

To simplify OLA for use at the point-of-care, Nuttada and her collaborators developed a laboratory kit containing dried reagents and a paper-based platform that provides a visual readout of HIV drug resistance. Despite these improvements, the OLA kit still faced practical limitations. It required a costly thermal cycler and multiple user steps. The test also had to be run multiple times to identify all possible mutations responsible for drug resistance, increasing the test’s per-patient cost.

OLA-SIMPLE further simplifies Nuttada’s lab-based OLA concept. In an hour or less, the credit card-sized, self-contained system will process a plasma sample, and display easy-to-read results indicating the patient’s resistance to multiple types of ART and viral load. The test first isolates HIV-specific RNA from blood to boost the test’s detection abilities, which is especially important for patients with a low viral load. The RNA is then amplified on an integrated heating unit kept constant at 55º C. The device then processes the sample in two final steps – the sample interacts with dried reagents to display the patient’s viral load, and completes an isothermal ligation assay to determine drug resistance.

Video: Nuttada and her student team present the technology behind OLA-SIMPLE.

To carry out this work, Nuttada has built a team of talented undergraduate student researchers.  Her team includes BioE junior Betelhem Yohannes from the Lai lab; BioE juniors Jonathan Lim and David McIntyre and senior Nikki Higa, and Annie Wong-On-Wing, a senior in chemistry and biochemistry, from the Lutz lab. Betelhem and Jonathan worked on developing  a fast and safe RNA extraction method. Nikki and Annie contributed to provisional patents for dried reagent platforms and isothermal ligation technology. BioE undergraduate alumnus Ian Andrews, now a Ph.D. student in biological engineering at MIT, carried out the initial work on the device’s multiplexed, paper-based technology that enables detection of multiple types of drug resistance. David McIntyre designed and tested the microfluidic physics of the 3-D paper network that connects the device’s modules within its small form factor.

Describing her team’s efforts and success, Nuttada explains, “The APF Student Technology Prize has provided a very exciting research opportunity. The initial $10,000 funding has allowed us to work towards our new platform. We have become more productive, creative, and eager to convert our ideas into actions. In just a few months, we were able to achieve significant milestones by demonstrating proof-of-concept work in all areas of the proposal.”

The research team’s work is gaining visibility in the field of HIV drug resistance. They were among 200 delegates invited to present their progress on the OLA simplified lab kit at the 2015-16 International HIV Drug Resistance Workshop, held February 20-21 in Boston, Mass. The meeting gathered researchers, clinicians and community representatives in the field to discuss the growing challenge of HIV drug resistance, particularly in low and middle income countries. Nuttada explains, “Key stakeholders at the meeting – including representatives from the WHO, CDC, and other international entities – all stressed the urgent need for a point-of-care drug resistance test in low resource settings.”

With her APF award, Nuttada is moving forward to conduct proof-of-concept work and a pilot study. The team is planning to work with Inbios International to produce lab-based OLA devices, which will be sent to the site in Kenya under the UW Department of Global Health’s TREE (Treatment, Research, and Expert Education) program. Working with collaborator UW Associate Professor of Global Health Michael Chung in Kenya, the team will obtain feedback on usability, clinical workflow and performance to inform development of the proposed equipment-free device.

The OLA-SIMPLE concept could be adapted to diagnose a range of diseases, including Alzheimer’s disease, malaria, hepatitis and tuberculosis, and inform treatment decisions. Nuttada hopes that her work advances innovation in cost-effective solutions for individualized medicine that improve health care worldwide.