Above: A transmission electron micrograph of SARS-CoV-2 virus particles, isolated from a patient. Credit: NIAID

At the onset of the COVID-19 pandemic, Paul Yager, professor of bioengineering, knew a rapid and accurate test would be needed to screen patients for the new coronavirus. He immediately set to work adapting his point-of-care testing research to developing an at-home test for the new virus.

Since 2011, his lab has been developing compact, low-cost screening tests that can detect illnesses such as flu, dengue fever and HIV, and can be used by anyone, anywhere. The Yager lab’s technology uses nucleic acid amplification tests (NAAT) coupled with microfluidic devices to detect fragments of a pathogen’s genetic material in under 20 minutes. It offers a simpler and faster alternative to traditional gene-based testing, which requires a complicated lab process that takes a few hours to get reliable results.

Now, the Yager lab is applying its technology, called UbiNAAT, to COVID-19 tests, which could be used by untrained people in their homes as well as in health care facilities and low-resource settings around the world. The tests could also be used for screening at airports, workplaces, theaters and sporting events to identify carriers of the virus and limit its spread.

“Early detection allows both for early treatment and quarantining of pre-symptomatic individuals, and for identification of outbreak hot spots by local, state and national authorities,” Dr. Yager says.  His team has developed a prototype of the first version of their product, which will use a nasal swab or a saliva sample to detect SARS-CoV-2, the virus that causes COVID-19. They also plan to roll out a second version capable of detecting a complete respiratory panel at home. Their test is highly sensitive, instrument-free and disposable.

In April, the Yager lab  received $100,000 from Fast Grants, part of the Emergent Ventures program based at George Mason University, to speed advancement of their SARS-CoV-2 test. Dr. Yager and colleagues have formed a company, UbiDx, or Ubiquitous Diagnostics, to commercialize the test.

Dr. Yager and UbiDx also have applied to the National Institute of Health’s Rapid Acceleration of Diagnostics (RADx) initiative announced April 29, in which he hopes his technology will compete in a “Shark Tank”-like rapid selection process. The NIH will award shares up to $500 million, a portion of its $1.5 billion federal stimulus funding, to the testing technology candidates with the best odds of success. The goal is to make millions of accurate and easy-to-use tests per week available to all Americans by the late summer or fall 2020, according to the NIH. 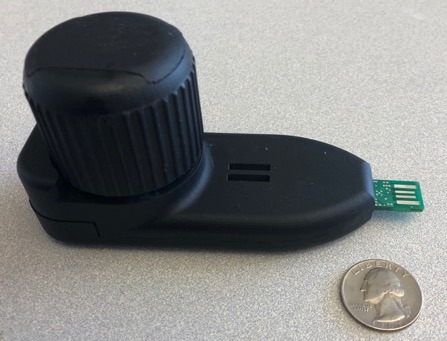 A working, early prototype of the Yager lab’s screening device, which would allow users to test for COVID-19 at home.

The Yager lab’s proposed kit, which would arrive in a foil pouch, features a six-inch device that could “talk” to a smartphone. The user would scan a QR code to download a smartphone app, insert their sample in the device, close the lid and wait less than 30 minutes for results to appear on their phone. The goal, Dr. Yager says, is to present the user with the results and offer a way to opt-in to have their test results sent to a menu stakeholders, such as first responders, primary care doctors, Seattle & King County Public Health, or the Centers for Disease Control and Prevention. If selected by the NIH, the team also would work closely with the Food and Drug Administration (FDA) on developing the tests.

The biggest challenge by far is scaling up, Dr. Yager says, and NIH resources would help with that. “The challenge is how to get to a million of anything, and how to make it count as early as possible before the dreaded next winter,” he says.

On May 6, the FDA posted new guidelines allowing companies to develop and market at-home collection/mail-in test kits. The FDA has not yet authorized any test to be used and processed completely at home, but Dr. Yager hopes to be first in line when they do.

Read more about Dr. Yager’s research and testing for the novel coronavirus in a March 17 article in The Verge. Learn more about his technology in his TEDx Rainier talk on YouTube: Ultra low-cost diagnostics in a tiny box

Read about more coronavirus-related projects in the UW Bioengineering department.