The muscles and tissues in arms and legs change throughout the day. They warm up, cool off, stiffen, swell or constrict based on things like activity level, environment and age.

But a prosthetic leg does not change. People who rely on them must make manual adjustments throughout the day — usually by adding or removing padding within the socket of the prosthesis. This can be a cumbersome process in public, or when wearing certain clothing. Skipping adjustments can lead to pain or limit mobility.

University of Washington Professor Joan Sanders and her team are creating a new type of prosthetic leg: one that automatically adjusts its fit throughout the day. Her group, housed within the Department of Bioengineering, designs, builds and tests prosthetics for people with below-the-knee amputations — also known as trans-tibial amputations. Their latest prototype alters its fit without the need for adjustments to padding or user action. It detects in real time how well the prosthesis socket and amputation site are fitting and responds by automatically changing the size of the socket.

Test results with volunteers are so promising that the researchers hope to eliminate the need to add or remove padding throughout the day. 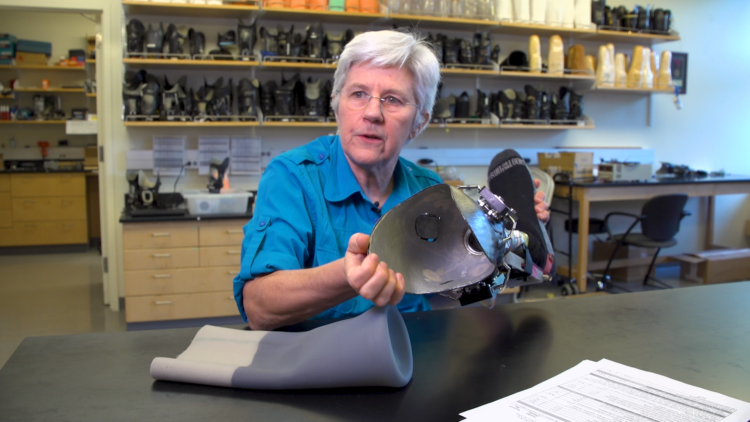 “We don’t want people to have to think about how well their prosthesis is fitting, because that is a barrier to living your life,”

At first glance, the prototype resembles a typical prosthetic limb for people with a below-the-knee amputation. But it contains several key features to make auto adjustment possible:

The adjustments that the panels make, which can also be controlled manually via an app on the user’s smartphone, are usually tiny — less than a millimeter.

“But they have a big impact because they maintain a fit between residual limb and socket that is not too tight and not too loose — but ‘just right,’” said Kate Allyn, the prosthetist on Sanders’ team.

Through trials with volunteers, the team has found that these automatic adjustments take the place of switching out padded “socks” that prosthesis users normally wear and change throughout the day.

“When I’m wearing this prototype, I don’t have to think about my prosthesis. The fit is always perfect,” said Daniel Lumley, a UW alum and volunteer who has helped to test the auto-adjusting prototype.

Through user trials with volunteers like Lumley, Sanders’ team is collecting more detailed data on the device’s performance and is working to make the prototype’s motors smaller and lighter.

“We are making an auto-adjusting socket that really works,” said Sanders. “I truly believe that.”

This research is funded by the U.S. Department of Defense and the National Institutes of Health.