A team of UW bioengineering and psychology undergraduates are creating an electricity-free clothes washer and dryer that captured the attention of judges and two prizes totaling $9,000 at several design challenge competitions this spring.

The students, ranging from freshman to senior, are designing a non-electric all-in-one washer/dryer device, which provides households in low resource areas with an affordable way to wash, dry and disinfect dirty clothing. They call it Arogya (pronounced aH-rOw-Gya), a Sanskrit word meaning health and freedom from disease, which the team says summarizes their mission and wish for every person.

“We firmly believe that health and sanitation are human rights, and seek to provide every human on the planet with a means to improve their personal, community and environmental health – one piece of cloth at a time,” says team leader Anushri Ramanath, a bioengineering major who was a junior this spring.

“We really wanted to focus on measures that could prevent disease,” says team member Arnav Shah, a freshman who hopes to major in bioengineering.

In March, they were selected and competed as one of 21 finalists in the Hollomon Health innovation Challenge, where they were able to refine their ideas. 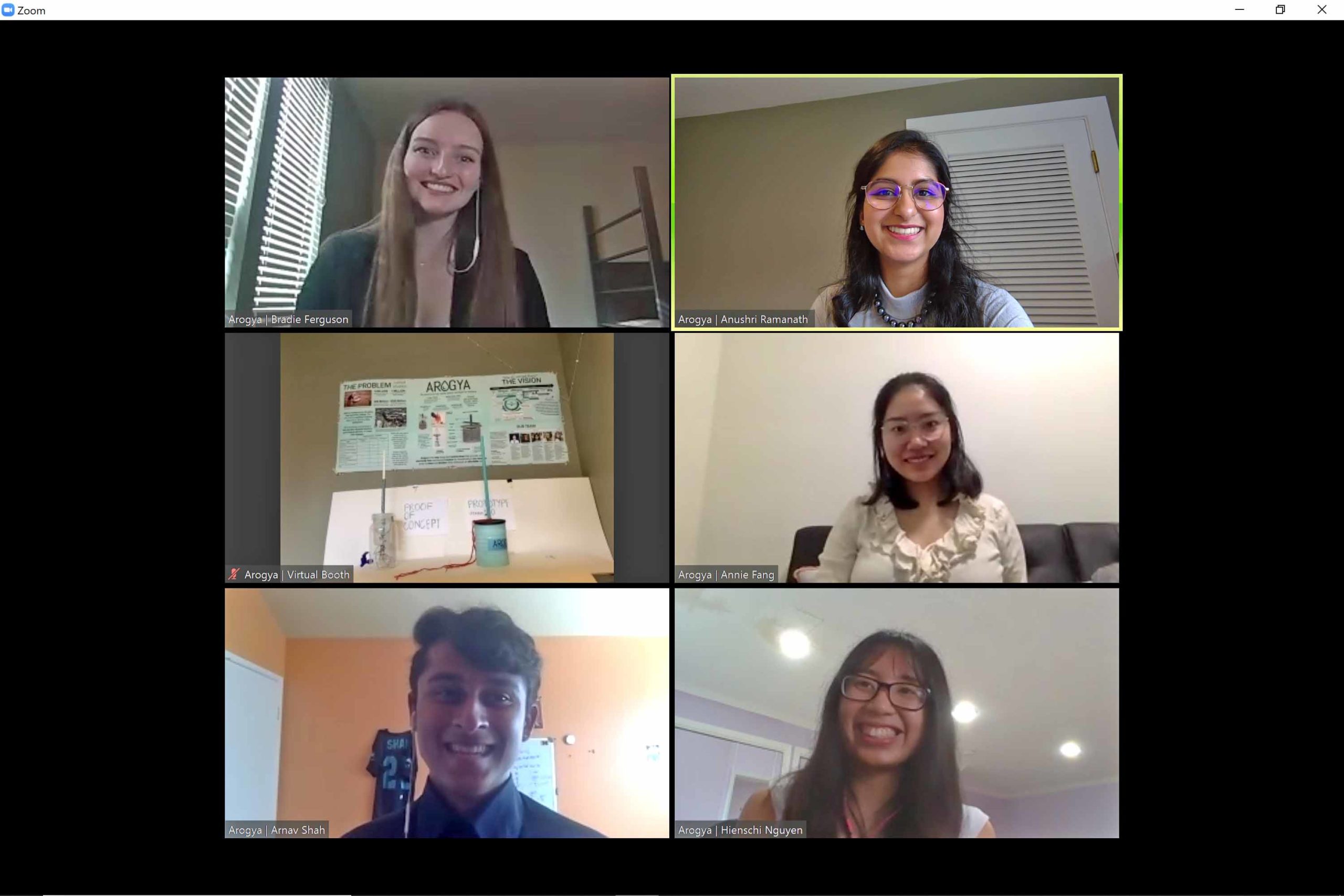 The Grand Challenges Action Prizes, one for a domestic-based idea and one for a global-based idea, emphasize action and reward student innovation that is developing self-sustaining, scalable solutions for low-income or disadvantaged communities. The judges awarded the team $1,000 in prize money and an additional $3,000 in funding to support implementing, piloting or prototyping their idea.

After working their way through the seven-week, multi-stage Dempsey Startup Competition, on May 22 judges awarded Arogya the $5,000 MOD Pizza Social Impact Prize. The Social Impact Prize recognizes a venture that “not only demonstrates the capacity to deliver financial performance, but also shows how it makes a positive contribution to society.”

The students’ current goal is to develop a final prototype that will help them file for a provisional patent by the end of the year. They also hope to begin pilot testing their product in the Seattle area and South India sometime in the upcoming year.

“We’re currently iterating our prototype to ensure that the key features meet the quality standards we mandate for our device,” says Hienschi Nguyen, a junior in Bioengineering.

Due to the COVID-19 pandemic and physical distancing directives, the team lost access to the MILL Makerspace on campus, which they had been using as a workshop. But, says Anushri, “we’re maintaining resilience. We’ll be using some of the funding to purchase key equipment and materials that will allow me to transform my parent’s garage into a mini-workshop and continue with product development.”

UW Bioengineering’s Christopher Neils, senior lecturer, is one of the team’s advisers, along with Sorah Seong, professor at the UW Foster School, and Dr. Alka Kulkarni, a physician in India. The team is networking with investors, lawyers and other experts in the business, engineering and global health fields to gain advice and help build a solid foundation for their business.

Anushri also is reaching out to doctors and other personal connections she has in the Indian medical community to receive ongoing product feedback and ensure that their design is satisfying the specific needs of their target audience.

Anushri has been thinking about her idea for the project for a few years, and she is grateful for how the team came together and met with success over just a few months.

“Being granted the prizes means so much to our team,” she says. “The support from the Grand Challenges Impact Lab, MOD Pizza, Buerk Center, judges, professors and other advisors we’ve met have been incredibly reaffirming of this mission and have helped motivate us through challenges and moments of doubts along the way.”

The Arogya team members and class year during the competitions are: