The project will generate a biomaterials vaccine technology that is given once, eliminating the need for repeated larger doses.

Researchers at the University of Washington are working to develop an injectable biodegradable hydrogel for the sustained release of self-replicating mRNA (SR-mRNA) vaccines. The team’s vaccine delivery system will release nanometer-sized particles that target multiple Staphylococcus aureus genes with one injection, rather than as a series of shots.

Staphylococcus aureus (SA or staph) germs are commonly found on the skin and in the nose of healthy humans, where they rarely cause harm, but severe disease can result from infection of the blood, bone, skin, and lungs, and at the sites of catheters and prosthetic medical devices. Prior to the COVID-19 pandemic, hospital-acquired staph infections were the 5th leading cause of death in the United States, with 2 million cases a year, creating at least $5 billion in added medical costs annually. Staph infections are made worse by resistance to antibiotics, including methicillin and vancomycin (MRSA and VRSA strains). With currently approved treatment, about one-third of patients diagnosed with SA bacteremia succumb, accounting for more annual deaths than HIV, tuberculosis and viral hepatitis combined.

This project will generate unique biomaterials technology that is applied only once, thus eliminating multiple boosters; much to the delight of both patients and care givers. – James Bryers

“This project will generate unique biomaterials technology that is applied only once, thus eliminating multiple boosters; much to the delight of both patients and care givers,” James said. “We will further document that the SR-mRNA vaccines alone produce faster long-term immunity, and that once-injected hydrogels are superior in immunization versus repeated systemic injections.”

The grant will allow the Bryers lab to expand on previous work to develop biodegradable hydrogels that spontaneously form a porous scaffold upon injection and deliver a self-replicating mRNA vaccine that enhances the adaptive immune response.

In addition to the Bryers lab’s expertise in biofilms and mRNA vaccine delivery, the multi-disciplinary team includes, David Koelle, UW professor of medicine and of laboratory medicine and pathology and an expert in T cell Immunology, and Justin Taylor, an expert in B cell activation dynamics with Fred Hutch. They will develop an injectable polymer platform to deliver self-replicating mRNA vaccines targeting multiple antigens to immunize against staph infections. The group has identified rational vaccine candidates coupled with protocols to address B cell activation issues.

The team’s injectable vaccine depot features two key components: cationic polymers to condense and charge neutralize anionic self-replicating mRNA (SR-mRNA) vaccines into nanometer-sized particles, and an injectable biodegradable porous hydrogel, in which the nanoparticles are incorporated. Ultimately, the temporary hydrogel depots completely biodegrade into non-toxic by-products that are eliminated. This project will generate a self-immunizing biomaterials technology that is applied once, which is superior in immunization versus repeated large dose injections.

First, the group will optimize SR-mRNA vaccine design and nanoparticle construction as measured by T cell and B cell immune responses. The SR-mRNA will be constructed to express from one vector three or more antigens targeting the staph pathogen. Since the staph bacterium is both an extra-cellular and intracellular pathogen, these SR-mRNA vaccines will target both CD+4 and CD+8 T cell activation. “My colleagues have shown that failure of vaccines to produce protective antibodies may stem from the host’s prior exposure to the pathogen (e.g., HIV, SA)” James said. “This grant will allow us to predict vaccine failure by assessing, prior to vaccination, those naïve B cells able to bind to the candidate antigen and then measuring, after vaccination, the factors that limit the activation of naïve B cells.” 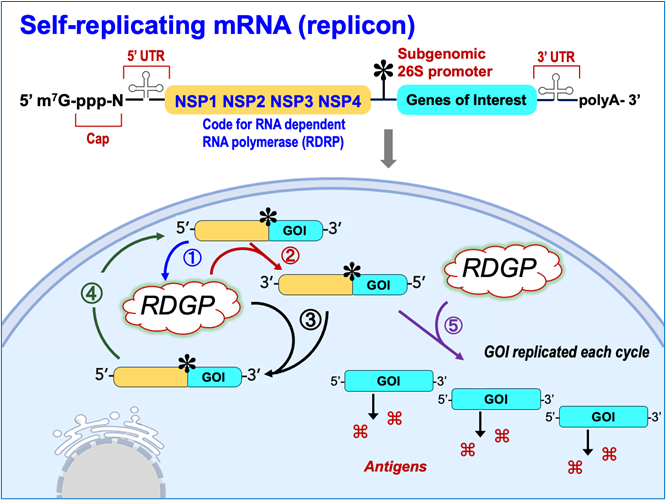 SR-mRNA comprises four genes for non-structural proteins (NSPs) followed by a 26S promoter then the antigen genes of interest. The NSPs genes are obtained from an alpha virus and code for the expression of an RNA-dependent RNA polymerase (RDRP). Once delivered, (1) expression of NSPs produces RDRP, that makes a 3′-5′ copy of the replicon (2), that is used to make another 5′-3′ replicon (3), which in turn re-enters the cycle (4). Each cycle starting at the 26S promoter, (5) RDRP also copies just the 3′-5′ GOI into a 5′-3′ GOI, which in turn expresses the desired antigens. Thus SR-mRNA autocatalytically produces multiple copies of the desired antigen genes.

The team will also optimize the release of the nanoparticles from the hydrogel, both in the lab and in mice, and measure the short- and long-term T cell and B cell immune responses.

Finally, in two pertinent mouse models, the team will compare the one-time-only injected polymer vaccine depots that release the SR-mRNA nanoparticles to repeated SR-mRNA nanoparticle injections without the hydrogel to provide short- and long-term immune protection against both a SA challenge to a model biomedical implant and a SA intravenous sepsis model.