Home/News, Students, Diversity/Senior Brittney McKenzie is developing paper diagnostic devices to improve lives at home and around the world
Previous Next

In the weeks before graduation, UW Bioengineering senior Brittney McKenzie is putting her final refinements on an invention she hopes will change lives around the world. She has developed a highly sensitive time-delay valve, which is embedded in low-cost paper network tests that quickly diagnose killer diseases such as flu, Dengue fever and malaria. The device — think disposable, foldable card – is a potential game-changer in low-resource settings around the world. 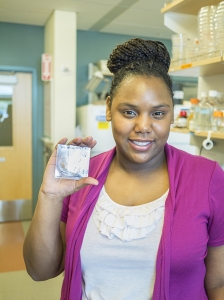 “I’m working to increase the sensitivity of these microfluidic devices,” she explains. “The next challenge is to enable the use of saliva or urine samples, rather than blood, to minimize the risk of infection.”

Brittney, a Mary Gates Research Scholar working in Research Assistant Professor Elain Fu’s lab, has seen first-hand how this research could help people in places such as the tropical rainforests of South America.

As a sophomore, Brittney traveled to her parents’ birth country of Guyana, where she shadowed her cousin, a nurse working in a small town surrounded by the Amazon rainforest. She was struck by the number of people suffering from treatable and preventable diseases such as malaria and HIV, due to a lack of infrastructure and access to medical technology. “It was a real eye-opener,” she says. “I kind of felt guilty and helpless at the same time.” The experience cemented her commitment to research science and her desire to develop low-cost, accessible technologies to meet medical needs, wherever they exist.

In addition to the valve work in paper diagnostic devices, as a UW undergraduate researcher, Brittney has helped improve the fit and comfort of prosthetic limbs and produced nanospheres aimed at targeting neuroblastoma cancer cells. But Brittney might never have found bioengineering had she not attended a UW Bioengineering summer camp for high school students. “I didn’t even know what bioengineering was,” she recalls. Once she learned about the impact of bioengineering, including implantable devices and tissue engineering, she was hooked. “That really got my attention,” she says. “I liked the idea that I could help people and improve their lives.”

Mentoring the next generation

Brittney knows a little encouragement can also change lives. As a Seattle high school student, she received help applying for college and financial aid through the UW Women’s Center Making Connections Program. She had her pick of attending schools such as Johns Hopkins University, Spellman College and UW.

“I choose UW because of the strength of its bioengineering department,” she says. She received numerous scholarships, including the Washington NASA Space Grant Scholarship, the UW Costco Diversity Scholarship and the College of Engineering Emerging Leaders in Engineering Scholarship. As a freshman, she went back to the Women’s Center for the continued support system, and she’s been actively giving back ever since. When not in the research lab, Brittney tutors and mentors high school students through the UW’s Making Connections Program.

“Women and underrepresented minority students are underrepresented in engineering, so for me it’s important that I involve myself in helping them find success and in creating a diverse population in the field,” she says. Since 2011, she also has served on UW’s Women in Science & Engineering (WiSE) Advisory Board, which recruits and supports women in the fields.

“A sense of belonging”

Her advice to younger students?

“Take advantage of all the resources we have in the department and on campus to help you succeed,” she says. “As a first year, don’t be afraid to ask for help when you need it – from advisers, peers, mentors.” Several factors made a difference her freshman year, which was particularly challenging due to her father’s diagnosis of multiple myeloma, a cancer of plasma cells (he’s now in remission). Smaller core class sizes, study groups, and peer support all helped. “There’s a sense of belonging, and a real sense of community,” in the program, she says. “The professors are approachable, and there’s an intimate atmosphere where people are working together in groups.”

In fall 2013, she begins work on her PhD in bioengineering at the University of California, Riverside, building on the work she did at UW. She plans to continue mentoring students, and wants the opportunity to both teach and do research. One day, she says, she hopes to have her own research company that develops bioengineering devices for global health purposes. “I feel my broad research experience at UW has prepared me to be able to choose my own pathway,” she says.