Human blood cells may be well understood, but the forces involved in blood clotting are not. Bioengineer Gianluca Interlandi, who joined the faculty July 1, 2014, as a research assistant professor, studies the molecular puzzle of how blood proteins interact with each other and other surfaces to stop bleeding and form clots.

Interlandi came to UW with BS and master’s degrees in physics from ETH Zurich, and a PhD in biochemistry from the University of Zurich. He previously worked with Wendy Thomas, associate professor in UW Bioengineering, as a postdoctoral fellow and then a research scientist. His new position allows him to expand on that research. 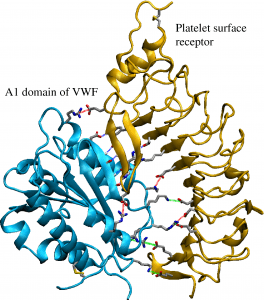 BLOOD CLOTTING BEGINS A key building block of the blood clotting protein von Willebrand Factor, called the A1 domain (shown in blue), binds to receptors located on the surface of a blood platelet (shown in yellow), stopping its flow. Sensitive to force, the more pull it feels, the tighter it holds on.
Credit: Gianluca Interlandi

Interlandi studies a large protein in blood called von Willebrand factor (VWF), whose job is to start your body’s blood-clotting process by slowing down free-flowing platelets. One specific building block of the protein binds to receptors located on the surface of blood platelets. This bond responds to force – the more pull it feels, the tighter it holds on.

Several mechanisms can activate VWF. When you get a deep cut and end up damaging an artery, fast flowing platelets create high shear, triggering VWF to slow them down. Another recently discovered mechanism involves inflammation due to traumatic injury. A rush of oxidants to the site causes methionine residues to oxidize and, in turn, activate VWF – and clotting begins.

Abnormal clotting can also occur. Implanted medical devices and materials might attract blood proteins and form a blood clot where you don’t want it. In atherosclerosis, when arteries become too stiff, platelets start piling up and VWF gets activated.

Scientists don’t yet deeply understand the inner workings of VWF. Interlandi hopes to discover how outside factors, such as force generated by rapidly flowing blood or oxidative stress, change VWF’s molecular structure. This is needed in order to control VWF function in patients.

“Eventually we hope to have pharmaceutical drugs that can inhibit VWF in patients at risk of stroke or heart attacks without life-threatening side effects like intra-cranial bleeding,” he says. “In other words, a drug needs to distinguish whether VWF is active because there is a wound or because of a pathological obstruction.”

Discovering how proteins work at the atomic level

Interlandi uses a combination of methods, including computer simulations of molecular dynamics and wet lab-based flow chamber experiments to reveal how VWF works at an atomic level of detail.

He also collaborates with other principal investigators and is involved in projects where molecular dynamics simulations can help gain insights into protein function. For example, he studies another protein, called FimH, that is also activated by tensile force and is responsible for anchoring bacteria onto infected cells. FimH exists in two states – one binds stronger to a target while the other binds weakly. Interlandi has been investigating the sequence of events that leads FimH to convert from one state to another.

“Ideally, I would like to see at the atomic level how this protein changes conformation from a low to a high affinity state,” he says. He hopes that the insights learned from FimH can help him better understand how VWF works. Currently in VWF, only one state is known but researchers are trying to understand whether it can exist in an alternative state and what that might look like.

In graduate school, Interlandi discovered that he could apply his deep knowledge of computational physics to the field of biology. He got into computational structural biology, which took him to bioengineering. “What I really liked was that it was problem that I could almost touch with my hands – it wasn’t just theoretical,” he says.

Interlandi says he appreciates the strong potential for collaboration at UW Bioengineering and its diverse research, as well as the inspiration that arises from fellow researchers on campus. In 2013, he received a National Heart Lung and Blood Institute K25 career development award.

“It’s important to see your country from a different perspective”

Interlandi, whose parents are Italian, was born in Switzerland. He spent his formative years in Italy and his teen years in Switzerland before coming to the U.S. He speaks five languages and admits there are challenges to adapting to different cultures. However, he says, “One thing I encourage people to do is to go outside the United States. I think it is important to see your country from a different perspective.”

After spending long hours running computational simulations, Interlandi enjoys ballroom dancing – particularly the waltz and Swiss disco swing, which is similar to American swing dancing – as well as outdoor sports. In Switzerland he learned mountaineering, rock climbing, skiing and ski mountaineering. He was happy to discover he could do these same activities here, and shortly after arriving, he climbed Mt. Rainier. These days, Interlandi, who became a father nearly two years ago, takes his young son on lowland hikes around the area.