UW bioengineers have engineered tiny blood vessels to study blood clotting disorders and blood flow in kidneys and other organs, and are also getting to an understanding of how mechanical forces affect blood clotting, which may one day help prevent heart disease and stroke.

UW Bioengineering Assistant Professor Ying Zheng is addressing the need for better tools to study human physiology. Her group is developing engineered vascular microenvironments to study the function and behavior of cell, tissue and organ systems. These methods could help researchers better understand the mechanics of human disease, and lead to clinical applications for regenerative tissue and organs. Their work may also contribute to more accurate methods for screening drugs during the research and development process.

In a paper published in the July 2015 issue of Nature Communications, Dr. Zheng and collaborators from UW and Seattle’s BloodWorks Research Institute described a “proof of concept” platform for studying the initiation of blood clots in the lab. Specifically, they examined the behavior of von Willebrand Factor (vWF) in complex microvasculature and modeled its role in blood clotting disorders.

In healthy individuals, vWF promotes blood clotting by helping platelets bind to damaged blood vessels, remaining bound until removed by the enzyme ADAMTS13.  Patients with clotting disorders like thrombotic thrombocytopenic purpura (TTP) are often deficient in ADAMTS13, reducing the body’s ability to remove vWF. Failure to clear vWF causes the formation of extensive microscopic clots in small vessels throughout the body. The systemic blood clots may cause reduced blood flow to vital organs, and potentially lead to organ failure and death. 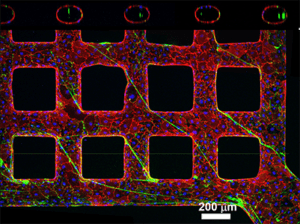 Engineered vessel network simulates the architecture and dynamics of microvasculature, enabling researchers to examine the function of vWF in clotting disorders.

Imaging microvasculature in sufficient detail is difficult, and as a result, the role of vWF in diseases like TTP and other conditions resulting in clots in small vessels is poorly understood. The platform that Dr. Zheng’s lab developed simulates the architecture and fluid dynamics of microvasculature, and allows them to further investigate the function of vWF in TTP and similar diseases.

The researchers used collagen to build complex vessel networks – including vessels that were straight, turned and that formed grids. In the vessels, they cultured endothelial cells – the cells that line blood vessels –  from a human umbilical vein and simulated blood flow. They discovered that within two weeks, the engineered microvessels had developed endothelial characteristics like those found in the body.  The endothelium, after activation, secreted vWF and bound platelets from the blood flow.

They also found that in larger vessels, following vessel activation, vWF and bound platelets stayed close to the vessel wall and were less likely to block blood flow. However, in smaller vessels with frequent twists and turns, they found that vWF formed long, sticky webs that promoted the formation of platelets into clots. They also found that the absence of ADAMTS13, like what happens in TTP, promoted clot formation at the opening of blood vessels.

The researchers’ work provides insight into the underlying mechanisms of TTP, and provides a flexible platform that can be adapted to study other organ systems. Following this study, Dr. Zheng and another team of UW researchers employed a similar vascular engineering method to study the kidney microvasculature. Their findings were published in the December 2015 issue of the Journal of the American Society of Nephrology.

The kidney microvasculature system serves an important role in eliminating toxins from the body, but is also susceptible to damage, particularly following exposure to toxins, drugs and chemicals. The cells that surround and support tiny filtration tubes in the kidney are especially vulnerable because they have limited regenerative capacity.  Once damaged, these cells’ inability to repair themselves may contribute to kidney dysfunction, disease and failure. 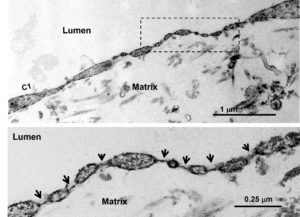 3-D kidney microvascular system demonstrates the  characteristics that contribute to the kidney’s reduced regenerative abilities and susceptibility to damage.

In their experiments, the researchers compared the function of kidney endothelial cells to that of umbilical vein endothelial cells. When compared to umbilical cells, the researchers found that kidney cell networks exhibited unique features. While kidney cells showed high tube-forming activity, they weren’t as good at forming new blood vessels. They were also more vulnerable to shear stress and more permeable, which made them weaker overall.

The researchers’ findings confirm the characteristics that contribute to the kidney’s reduced regenerative abilities, and susceptibility to damage and injury. Their work provides a framework for lab-based kidney studies, and identifying new methods for preventing and treating kidney disease.

Dr. Zheng has also been working on bone marrow vascular microenvironments to study blood cell generation in healthy and diseased conditions. In the future, Dr. Zheng plans to investigate the vascular structure and function of other organ systems, comparing the heart, liver and lungs to better understand their vascular differences, and work toward vascularized organ-on-chips.

Another UW bioengineer studying the forces behind clotting and cardiovascular disease is Wendy Thomas, associate professor of bioengineering. Dr. Thomas is trying to understand how mechanical force influences the way proteins bind to surfaces. One example is catch bonds, which are adhesive bonds that hold tighter when more force is applied.

In research published in the Proceedings of National Academy of Sciences in August 2015, Dr. Thomas and her colleagues established that a big advantage of catch bonds is that they can switch between a weaker, fast-binding state and a strong binding state. This allows bonds to form quickly even in challenging situations that happen during cell adhesion, such as variable blood flow and shear stress. 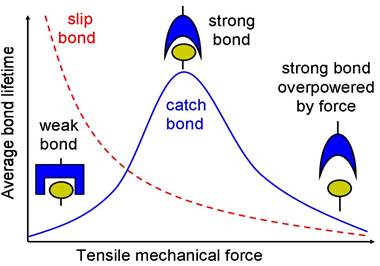 Catch bonds hold tighter as more force is applied, useful for binding in the tumbling and pulsing conditions of blood flow.

“It finally clarified to us why all of these cells are down-regulating their adhesives so that they require force,” Dr. Thomas says. “If you have one that’s always weak, it’s not strong enough to bind, and if you have one that’s always strong you can’t bind rapidly enough to capture in flow.” Their research suggests mechanical forces drive the switch in the adhesion protein called FimH during changing conditions, allowing it to hit a sweet spot for binding.

Dr. Thomas and her team are applying lessons learned from this bacterial adhesion protein to understanding problems with blood clotting and endocarditis, both major problems in cardiovascular disease.

She and her team study von Willebrand factor, the clotting protein that helps blood platelets bind and begin clumping together at high flow, a critical part of both arterial wound healing and unwanted blood clots. Normally platelets and vWF circulate in the body without binding to each other. The platelets have a receptor that’s always activated or at least always ready to bind, Dr. Thomas says, but something about the vWF is not ready to bind when it circulates.

Giving the protein a surface to grab onto however, seems to activate a change. If vWF binds to exposed collagen – what happens if the protective layer of endothelial cells lining a blood vessel is damaged – or if it binds to the surface of biomaterials placed into the body, then the platelets suddenly bind to vWF much more easily. They still bind better at higher flow, most of the time, but they stick to each other more readily if the vWF is on a surface.

That’s one of ways the protein helps support healing, but in some conditions, such as an artery narrowed by atherosclerosis, it can cause a blood clot, or particularly, problems on biomaterial implants.

Dr. Thomas and David Castner, joint professor of bioengineering and chemical engineering, recently submitted a paper revealing their understanding of some of the changes that occur when the domain of vWF that’s recognized by platelets binds to different surfaces. When it binds to some surfaces it seems to be activated in a certain way so that it’s prepared to bind to platelets even without high flow, Dr. Thomas says.

The team is also working to understand how — and why — vWF activity is typically reduced when it’s circulating. Researchers know that the domain of vWF that’s recognized by platelets forms catch bonds, but Dr. Thomas wants to better understand why it needs mechanical force or surface immobilization in order to activate the binding to platelets.

In her von Willebrand factor work, Dr. Thomas collaborates with BloodWorks Research Institute to understand the structural basis for the mechanical activation of clotting. The long-term goal of their projects is to try to understand the changes that are involved in the vWF regulation process so that researchers can develop clinically useful ways to help when clotting goes awry. “The clinicians are always dealing with how to walk the balance between bleeding and clotting,” Dr. Thomas says. “We want tools that will specifically control that balance, but it’s a long path, and we’re at the beginning of it.” 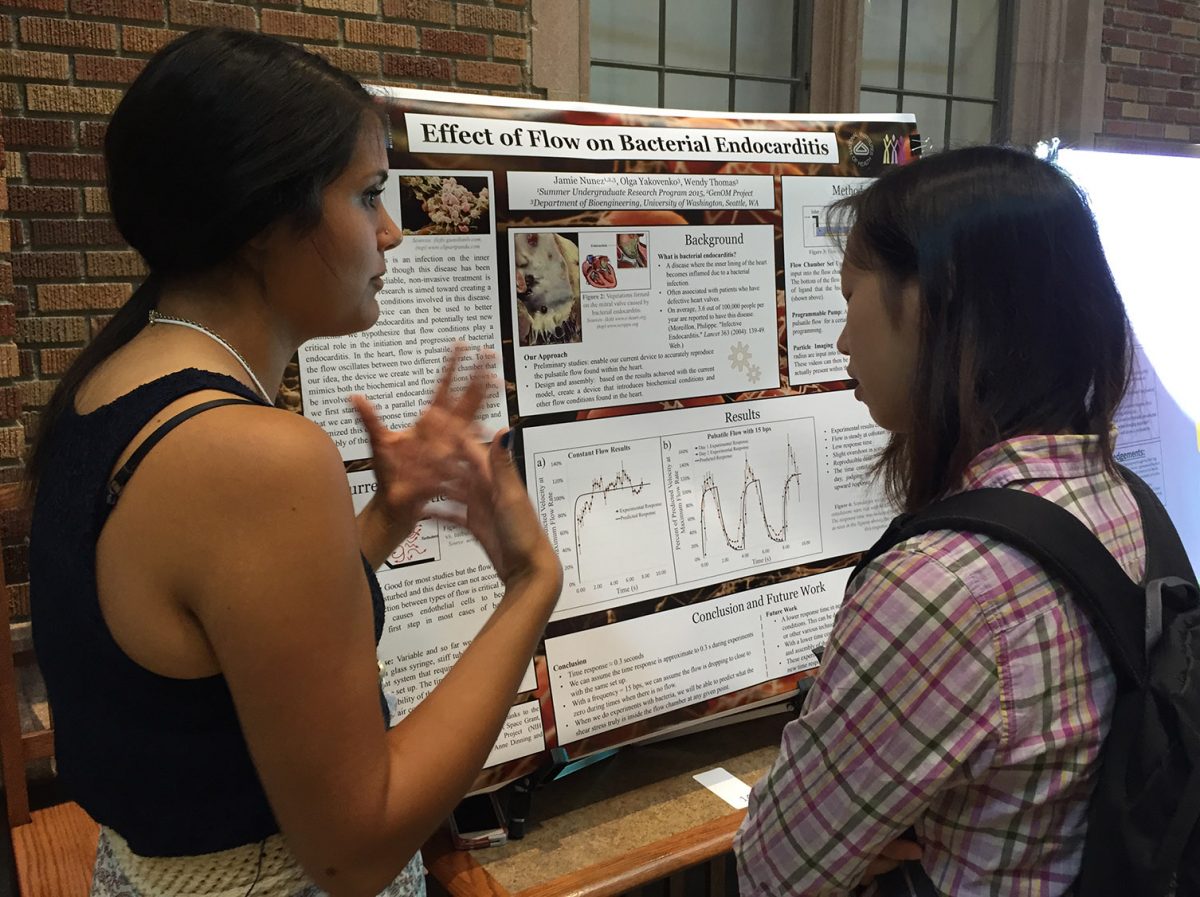 Dr. Thomas is also using her understanding of catch bonds and adhesion to study processes behind endocarditis, inflammation of the heart’s inner lining. In a collaboration with the University of California at San Francisco and Vanderbilt University, her team is studying how streptococci bacteria adhere to platelets and then bind to heart valves, where blood flows faster than in any part of the body.

“These are all processes that we want to regulate to control infection or thrombosis,” Dr. Thomas says. “You can’t inhibit something if there’s a major regulatory mechanism that you don’t understand.”