UW Bioengineers Use Cholesterol Tag to Ease Proteins into Cells

UW Bioengineers Use Cholesterol Tag to Ease Proteins into Cells

Xiaohu Gao, professor of bioengineering, and his lab have developed a new, cholesterol-based tag system to bring imaging and disease-treating proteins directly into a live cell, bypassing the cell’s defenses. They reported their finding June 19 in Science Advances.

Traditionally, imaging and treatment of live cells has been limited to biomarkers on the cell’s surface, because the cell’s natural defenses block large biomolecules, such as proteins, from freely crossing the cell membrane. With the vast majority of desired imaging and disease targets located inside the cell, researchers have been working on methods to bypass this problem.

“We have found a way to slip them in, opening exciting opportunities for imaging intracellular signaling pathways in real time, and development of protein-based therapeutics,” Dr. Gao says.

Notably, the technology would allow protein drugs, such as biologics – used in a wide range of products including vaccines and gene therapy – to enter targeted cells in greater numbers without punching holes in the cells and damaging them, as some technologies do. Their method also avoids the partial breakdown of proteins that happens with endocytosis, the cell’s process of taking in external substances. The more proteins that are able to enter the cell, the more effective the treatment. 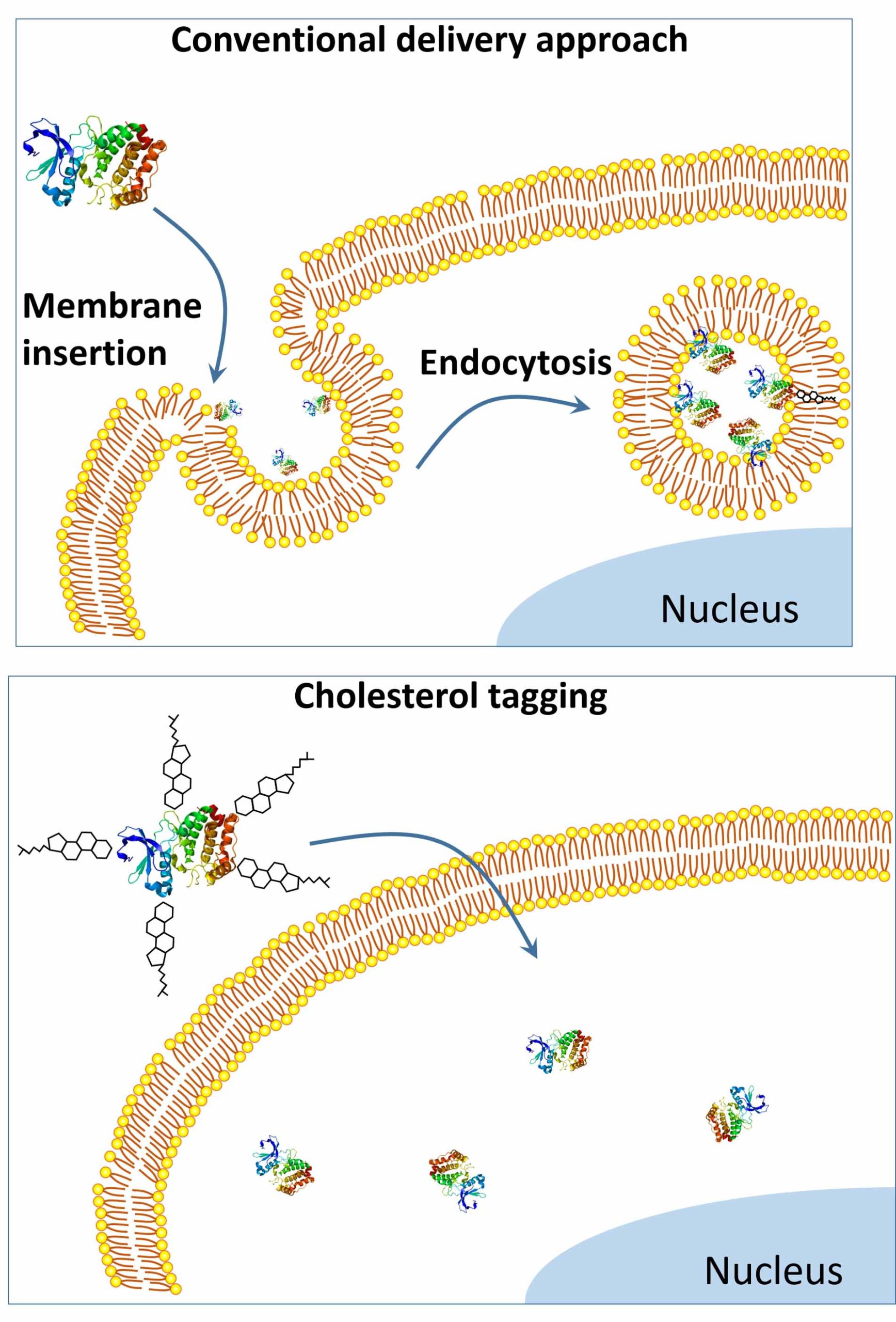 Calling it a “plug-and-play platform,” the authors note the system is especially suited to small proteins, such as antibody fragments, nanobodies, engineered antibodies called single-chain variable fragments (scFvs), peptides, and some enzymes.

When they mix the tag with proteins, the dye end of the tag latches on to the protein molecules, and the exposed cholesterol makes the cargo protein compatible with the cell membrane lipid bilayers, the authors suggest.

The authors hypothesize that because the protein tag is formed with a slightly weaker, noncovalent bond, the protein molecule is able to separate in the membrane bilayer, where its incompatibility forces it either into the cell’s center or back out.

The researchers tested their technology in 10 types of human cells, using a range of protein sizes. They found that direct permeation into the cells was most effective with smaller proteins, likely due to the larger molecules causing a bulge in the cell membrane.

“This simple yet powerful technology not only enables immuno-labeling of intracellular targets in live cells for dynamic imaging, but also opens exciting opportunities for the development of protein therapeutics and cell engineering,” the authors write.