Home/UW spinout gets $14.9M boost from NIH for COVID-19 rapid test
Previous Next

Anavasi Diagnostics, recently spun out of Barry Lutz’s lab, will advance commercialization of its PCR-equivalent, affordable, rapid molecular COVID-19 test. It is one of the 44+ active startups generated by UW BioE faculty and students.

Smarter testing for COVID-19 is one of the cornerstones of several nations’ plans to help curb the pandemic. But gold-standard PCR tests take time – usually 1-3 days – and currently available rapid tests are either less accurate or very expensive.

Seattle-based Anavasi Diagnostics aims to change that with its new rapid molecular COVID test that produces results equivalent to lab-based PCR tests in about 30 minutes. The company, which recently spun out of Associate Professor of Bioengineering Barry Lutz’s lab, announced Nov. 9 that it has received $14.9 million from the National Institutes of Health Rapid Acceleration of Diagnostics (NIH RADx) initiative to speed the availability of its new molecular diagnostic tests to broad markets. 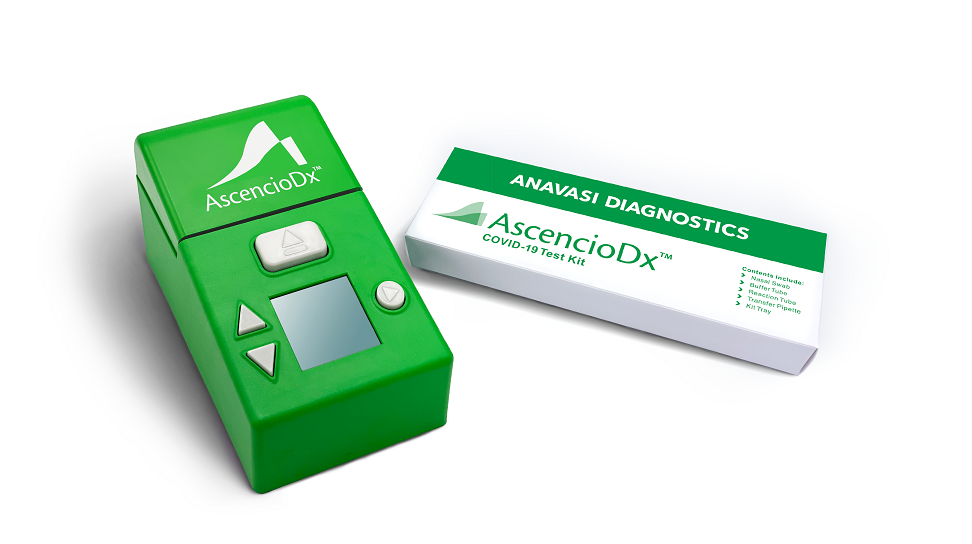 Anavasi’s affordable molecular test kit gives lab-quality results in about 30 minutes, and future versions of the reusable device will be able to run tests for other diseases. Image courtesy Anavasi Diagnostics.

The system features a palm-sized, reusable detector that’s good for at least 3,000 single-use nasal swab tests. The test is currently in clinical trials, and Anavasi expects to file its submission to the U.S. Food and Drug Administration (FDA) for Emergency Use Authorization (EUA) “in the near future.” The initial EUA will be for use by a licensed medical professional in places such as physician offices, urgent care clinics, mobile testing sites, colleges and universities, and workspaces. Designed to be affordable and use the more comfortable lower nasal swab collection method, the company plans to later explore approval for at-home use.

The new test uses a proprietary amplification and detection method, first developed at UW to detect influenza and HIV variants. It uses an advanced loop-mediated isothermal amplification (LAMP) technique, which works at a constant temperature and yields rapid but highly accurate results. In contrast, the gold-standard PCR technique runs through a series of repeated heating and cooling cycles, which takes time, requires the use of expensive lab equipment, dedicated lab space and highly trained technicians to perform.

“Innovative chemistry developed at UW, including multi-color fluorescence detection and a special protein used in amplification, allows high performance in a very simple and low-cost system,” explains Dr. Lutz. “Also, the test detects all known variants of the virus, and it has built-in redundancy to prevent false-negatives due to future mutations.”

The research team published its research results Dec. 15 in Science Advances. Their technique can be adapted to detect other viruses and bacteria, and the team expects future products will be able to test for multiple infections, including influenza and other respiratory viruses.

At the start of the pandemic, the Lutz lab astutely recognized that its work on HIV tests and with the Seattle Flu Study could apply to developing a COVID test. Research scientist Enos Kline connected with fellow Lutz lab researchers Mike Roller and Nuttada Panpradist to develop a prototype. The UW College of Engineering featured their early research efforts in a November 2020 article.

Anavasi launched in September 2020 when a $350,000 NIH grant allowed the team to take critical steps toward commercial production. It advanced quickly with guidance and support from the Center for Washington Entrepreneurial Research Evaluation & Commercialization Hub (WE-REACH) and the NIH RADx initiative. WE-REACH recently wrote about the journey that Lutz and his team have been on as they moved their technology from university-based research to a funded commercial enterprise. The company has raised an additional $8.6 million from individual investors.

“We aim to make high-quality testing affordable and accessible around the world,” Dr. Lutz says.