Azadeh Yazdan is co-creating a new tool using AI to stimulate and record brain activity at the network level. The work holds promise for better treatments for a wide range of neurological diseases and disorders.

Article by Wayne Gillam, re-posted with permission from UW Center for Neurotechnology

According to the World Health Organization, almost a billion people around the world are affected by neurological disorders such as stroke, epilepsy and Alzheimer’s disease. That’s nearly one in six of us. For most of human history, many of these conditions have been virtually untreatable, and even today, modern medicine can only go so far. But neural engineers such as Azadeh Yazdan are pushing the envelope, seeking to widen our understanding of the brain, how it works, and what can be done to heal and restore this most vital organ when it doesn’t. 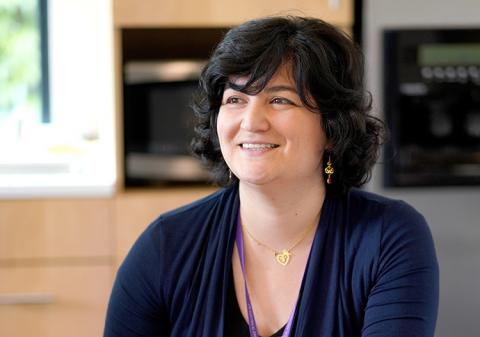 Azadeh Yazdan is co-leading a multi-institutional research team developing a device capable of seeing into and accessing the brain like never before. Dr. Yazdan holds a joint appointment in UW BioE and electrical and computer engineering as the Washington Research Foundation Innovation Assistant Professor of Neuroengineering.

Recently, Dr. Yazdan, UW assistant professor in bioenginering and electrical and computer engineering, and her colleague Maysam Chamanzar from Carnegie Mellon University received a National Institutes of Health (NIH) R01 grant to lead a multi-institutional team in engineering a unique device that will help researchers see and access the brain like never before. The device, called a “smart dura,” is based on work Dr. Yazdan did as a postdoctoral student developing a large-scale, long-lasting neural interface, which was used for investigating stimulation-based therapies for stroke. Dr. Yazdan is also the Washington Research Foundation Innovation Assistant Professor of Neuroengineering and a member of UW’s Center for Neurotechnology (CNT).

The smart dura is one inch in diameter and shaped like a porthole. It replaces the membrane (dura) surrounding the brain and rests on the surface of the organ, providing a transparent interface through which the underlying brain structure can be imaged and neural activity can be recorded or stimulated through electricity or light. The dura is “smart” because it uses artificial intelligence to selectively stimulate and record from the brain, as well as to recognize patterns, features and biomarkers in the brain that otherwise might be very difficult or even impossible for humans to detect. And although a one-inch diameter might sound small, when it comes to neural implants, it’s actually quite large.

“One of the unique things about this technology is the size and the scale in comparison to what we have in currently existing neural interfaces,” Dr. Yazdan said. “It enables us to have unprecedented large-scale access to the brain and with unprecedented resolution to both record and manipulate neural activity.”

A sizable view with high resolution, enhanced with AI

The relatively large size of the smart dura allows it to cover multiple brain regions with a single neural implant. This enables researchers to examine what is happening in the brain at the network level, rather than only study single or small clusters of neurons. By using the smart dura and its built-in artificial intelligence, neuroscientists will also be able to look at the communication between different areas of the brain, analyze volumes of data from neural recordings and better understand how brain connectivity functions and relates to a particular behavioral state or neural disease. Dr. Yazdan asserts that this device will help pave a path to an unprecedented understanding of the cortical circuits in both healthy and diseased brains.

The smart dura provides a portal into viewing the brain that’s not only larger, but clearer as well. This device will house 5,000 electrodes with each having the ability to interact with multiple neurons. That’s vastly more electrodes than what is in the best devices currently available to researchers today, which generally contain 250 electrodes or fewer. The large number of electrodes translates to sharper images of what’s happening in brain tissue beneath the device. The dense array of electrodes allows researchers to record large amounts of neural information and enables them to manipulate neurons through electrical and optical (light) stimulation at a very precise, high resolution.

The floor of the smart dura and the electrodes within it will be designed to be transparent, making the device compatible with imaging technologies. This will allow the team to view blood flow in underlying microvasculature and better understand aspects of the brain such as neurovascular coupling, which is involved with many debilitating diseases and conditions such as stroke.

“Having this sort of technology opens doors for a lot of scientific investigations and therapeutic developments,” Dr. Yazdan said. “It can bring insight into better understanding many disorders because we can have the capability to simultaneously image the brain structures, as well as record and stimulate neural activity at this large scale. We can intervene with the circuits and try to understand them.”

This is also a less invasive implant in the sense that it interacts with the surface of the brain without penetrating and disturbing the sensitive tissue below. And its design is based on a biocompatible polymer and nanofabrication techniques developed by Dr. Chamanzar and his team. The biocompatibility of the device gives it a long, useful life.

“Our smart dura is designed to have embedded functional elements for closed-loop electrical and optical recording and stimulation from the surface of the brain,” Dr. Chamanzar said in in a CMU press release, “Therefore, it can be a viable solution for chronic, long-term interfacing with the brain for a whole range of applications from brain-machine interfacing to designing new therapeutics.”

Dr. Yazdan added in the release, “The smart dura can remain stable for multiple years, enabling us to investigate neural circuits and to develop therapies over time frames relevant to humans.”

What the future holds

In addition to Drs. Yazdan and Chamanzar, the research team includes UW professors Ricky Wang of bioengineering and Wyeth Bair of biological structure, as well as CMU professor Elias Towe. The group will be developing and testing the smart dura over a five-year period, the duration of the grant. Eventually, the team wants to expand the smart dura’s size even more, to the point where it could cover almost half of the brain’s surface. They are also interested in leveraging the smart dura’s artificial intelligence and connecting it to implantable chips being designed by CNT members Chris Rudell and Visvesh Sathe and wireless technology being developed by CNT members Matt Reynolds and Joshua Smith. Dr. Yazdan is also working with a separate team of UW professors — Eric Shea-Brown, Ali Shojaie and Zaid Harchaoui — to further develop the smart dura’s artificial intelligence. In the future, these combined efforts could enable the implementation of a closed-loop system and significantly enhance the therapeutic potential of the device.

“These three projects: the smart dura, the chip design that goes with the smart dura, and the AI could all come together,” Dr. Yazdan explained. “This whole thing could create a system that could understand the neural recordings and deliver the electrical stimulation that might be required to address and mitigate a particular disorder.”

For example, a smart dura of this size and scope could detect an epileptic seizure coming on, electrically stimulate part of the brain to prevent the seizure and wirelessly transmit data to the individual’s health care provider — all without the person having to experience the seizure itself.

“In terms of clinical relevance, I think the smart dura is closer to being approved for humans compared to penetrating electrodes, especially for patterned electrical stimulation and recording,” Chamanzar noted in the CMU press release.

Dr. Yazdan is confident that her team will be able to test the recording and imaging capabilities of the smart dura in humans in the next five years, and she is optimistic that the device will move into clinical trials within five to 10 years. Along the way, she is remaining keenly aware of the profound human impact this device promises.

“There are people worldwide that suffer from neurological and psychiatric disorders with minimum effective treatment options,” Dr. Yazdan said. “The smart dura will be an unprecedented tool for understanding the pathophysiology of disorders such as stroke, epilepsy and depression and for developing better therapies.”