Image-based simulations will use multiple factors to create a personalized risk assessment that accounts for complex links between heart changes and clotting, which can ultimately lead to stroke.

Researchers at the University of Washington will create a new tool for determining stroke risk in people with an irregular heart rhythm, heart tissue changes, or both. The team expects to combine state-of-the-art medical imaging with sophisticated computational tools to learn more about why some people have a stroke.

UW assistant professor of bioengineering Patrick M. Boyle recently received a $2.9M, five-year R01 grant from the National Heart, Lung and Blood Institute at the National Institutes of Health to lead the project.

Scar tissue in the heart’s left atrium plays a key role in heart rhythm disturbances, and it may also contribute to blood clot formation. Scar tissue has complex effects on heart structure and function, with interactions that haven’t been fully captured or studied before.

“For the first time, we’ll be able to fully comprehend how scar tissue in the heart promotes blood clotting,” said Boyle, who leads the UW Cardiac Systems Simulation (CardSS) Lab and is a member of UW’s Institute for Stem Cell & Regenerative Medicine and the Center for Cardiovascular Biology.

“This project will help us understand how various factors, such as heart shape and scarring, electrical activity, muscle contraction and blood flow interact and contribute to abnormal rhythms, clotting and stroke. The knowledge we gain will pave the way for new treatments for millions of patients who are borderline candidates for anti-clotting drugs.” 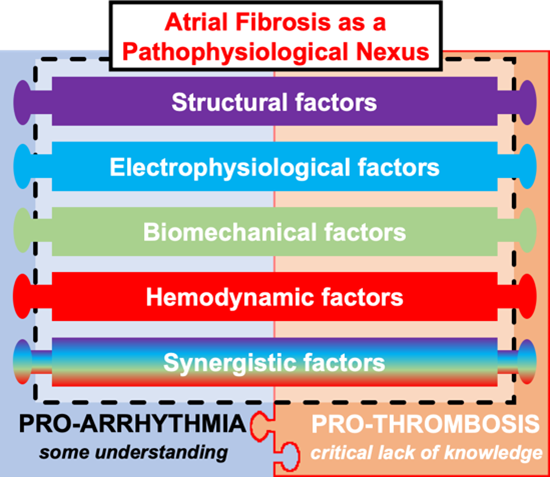 People who have atrial fibrillation – when the upper chambers of the heart quiver instead of beating rhythmically – have up to five times the risk of stroke. The heart condition, which is temporary but can be deadly or disabling, affects about five million Americans. About 30 percent of highly damaging ischemic strokes, which occur when a blood clot blocks a blood vessel in the brain, happen in people with atrial fibrillation.

But many people with stroke don’t appear to have atrial fibrillation, and they aren’t treated with anti-clotting drugs to help prevent another stroke, as studies haven’t shown the benefit. Sometimes the condition is hidden and will show up later. In other cases, Boyle and his team discovered, some patients’ hearts develop scar tissue that is similar to what occurs with atrial fibrillation but without the abnormal rhythms that are thought to ultimately result in stagnant blood flow.

Boyle’s CardSS lab will lead a large inter-disciplinary team, including UW collaborators Dr. Nazem Akoum, associate professor of medicine, director of UW Medicine’s Atrial Fibrillation Program, and section chief of Electrophysiology, and  Juan Carlos del Álamo, UW professor of mechanical engineering. The team also includes cardiac biomechanics experts based at the Medical University of Graz. Together, they will use computer modeling and medical imaging to create patient-specific simulations. Their new system will read a patient’s heart MRI scans, run simulations of a range of factors, including left atrium wall structure and motion, electrical activity, blood viscosity and flow, and then produce an accurate and custom-tailored estimate of each individual’s stroke risk.

According to Boyle, there is a lack of practical tools to help doctors comprehensively quantify stroke risk in people with atrial fibrillation or clot-based strokes where the cause isn’t known. The study’s findings could lead to changes in clinical treatment of at-risk patients, including personalized risk assessment and medical decision-making.

“This tool could be greatly helpful in determining which patients could benefit most from anti-clotting medication,” Boyle said.