UW Bioengineering B.S. program alumnus and Fulbright Student Fellowship recipient Hani Mahmoud took off for Kuwait last year, and since October he has been collaborating with scientists, nurses and clinicians at his host institution, Dasman Diabetes Institute (DDI). For his Fulbright project, Hani is working with DDI to establish an electronic health record that enables Kuwaiti schools to screen, record and assess the state of health of their student populations. 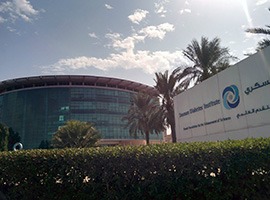 Kuwait currently faces one of the highest type II diabetes rates worldwide – nearly 25% of Kuwaitis are affected. Increased social mobility has contributed to an obesogenic environment in the country. As economic growth and opportunity have encouraged population expansion and urbanization, Kuwaitis have also adopted a sedentary lifestyle and unhealthy diet. Other factors such as a hot desert climate that limits outdoor activities as well as genetics also play a role in the disease’s increased impact. As diabetes and obesity increasingly affect youth as well as adults, DDI seeks to reduce the prevalence of these conditions. The organization employs research and education to promote and implement healthy lifestyle changes in the Kuwaiti population, and youth in particular.

So far, Hani helped and worked aside a team of 25 nurses who collected basic health metrics including BMI, blood glucose and qualitative lifestyle information from students across 11 elementary schools. By measuring approximately 400 students per day, the team has compiled over 8,500 electronic health records. After all the health records data is collected and analyzed, Hani plans to work with DDI to design and implement data-driven, results-based health intervention programs that enhance the health culture of individual schools and reduce the prevalence of diabetes, obesity and other non-communicable diseases. The project’s ultimate goal is to assemble nationwide data in a school electronic health record that can be used for demographic studies on diabetes and public health research worldwide.

In addition to his main research project, Hani has started working with DDI’s Public Health Department. There, he will work on three different research projects that assess the Kuwaiti public’s general knowledge of diabetes, examine breastfeeding practices in the country and investigate the incidence and management of gestational diabetes. In the future, he’s planning to work on some clinical research projects, as well as team up with a US startup on a bioengineering-related project to develop implantable polymer-based systems for glucose monitoring.

Hani has become involved in delivering education and outreach programs to the Kuwaiti public. Several times per week, he teaches nutrition and fitness classes to young students who come to DDI. So far, he has taught over 3,000 students participating in these “health field trips” about the impact of diabetes, and the importance of healthy eating and staying active. On weekends, he helps DDI run information booths at local malls that educate the public about diabetes and offer free glucose testing. Through working with DDI, Hani has had the opportunity to attend many diabetes-related symposia and enroll in clinical skills mini-courses. Reflecting on the experience, he’s “proud to say that the

[undergraduate] bioengineering curriculum [at UW] has prepared me well enough that I can keep up and be an active participant in these courses even though I am always the only person in the room without an MD.”

If it sounds like Hani is staying busy, he is. It’s not uncommon for expatriates like Hani who work in the private sector to work a 55-hour, 6 day work week. Even though his work hours are long, he explains that Kuwaiti culture often prioritizes family and social ties over work itself, which promotes a relaxed work atmosphere. “People generally seem more laid back than in America where work is almost always first priority.” He adds that in Kuwait, it’s not uncommon for people to take multiple hours for lunch break before going back to work.

When he’s not at work, Hani enjoys going to various social events at different embassies. In Kuwait, embassies are major sources of entertainment and play a large role in expatriates’ social lives. Embassies there host many events such as concerts, happy hours and parties. He also goes to markets to mingle with the locals. “There are surprisingly a lot of hipsters here, although they don’t resemble Seattle’s hipsters much,” he says.

He’s also taking time to enjoy the milder weather – while it lasts. “You are never more than 10 minutes from the beach and the weather is 75 degrees and sunny for half the year – the other half of the year, it’s closer to 125 degrees,” he explains. However, he admits that there isn’t much to do in Kuwait, “other than go to malls and cafes”, due to the fact that alcohol, bars and clubs are illegal.

Hani has taken advantage of the affordability and accessibility of traveling to other countries from Kuwait. “It is so much cheaper to travel the world from here than from the US,” he says. Over the holidays, he paid just $250 to fly to India and Turkey. He adds, “I could hop on a plane anytime to major destinations like Moscow, Johannesburg, or Singapore for $400 round trip.”