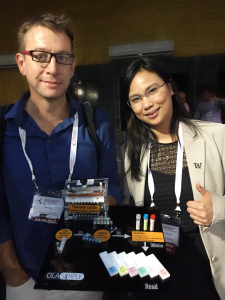 UW BioE Ph.D. candidate Nuttada Panpradist recently traveled to South Africa to present at the XXVI Internal Workshop on HIV Drug Resistance and Treatment Strategies. The workshop, held Nov. 6-8, invited 200 delegates from around the world to discuss the causes, spread and burden of HIV drug resistance in low- and middle-income countries.

To attend the conference, Nuttada received a Young Scientist Scholarship, which provided a registration fee waiver. She was also awarded the conference’s “Show-and-Tell” award for her oral presentation.

At the conference, Nuttada presented OLA-SIMPLE 1.0, an instrument-free HIV drug resistance assay she has developed in collaboration with a research team that includes Associate Professor Barry Lutz and Research Associate Professor James Lai of BioE, Professor Eric Klavins of Electrical Engineering, and Lisa Frenkel and Ingrid Beck of Seattle Children’s Research Institute. She discussed her research team’s findings on the device’s performance in processing dried blood spot specimens from South African infants, which indicated higher sensitivity than current methods, such as the gold standard Sanger sequencing. She also demonstrated a miniature version of the device to conference attendees, which integrates a battery-powered thermal cycler, dried reagents and lateral flow tests to perform all the steps of the lab-based OLA assay developed by Dr. Frenkel and Beck. At the meeting, Nuttada, and Drs. Lutz and Frenkel, met potential collaborators interested in helping the team advance the OLA-SIMPLE technology.

OLA-SIMPLE aims to become the first instrument-free device that can diagnose HIV, and detect both drug resistance and viral load, at the point of care. With this technology, Nuttada seeks to bring drug resistance screening to low-resource regions, including sub-Saharan Africa and Asia, where sophisticated and expensive diagnostics are out of reach. It is designed to be fast and simple to use  without requiring access to laboratory facilities, running water or power. She hopes to introduce the device to market at a cost of less than $10 per test, instead of the hundreds that lab-based assays can cost. In 2016, Nuttada received the $50,000 Third Place APF Student Technology Prize for Primary Healthcare for her work on OLA-SIMPLE.