Photo: Demonstration of a timber sample being collected and transported via water droplets on a microfluidic device. 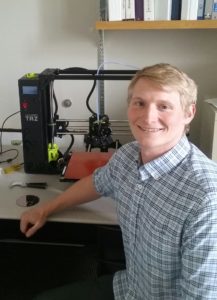 Bioengineering Ph.D. student Hal Holmes is developing a device that could help customs officials and agents of conservation combat wildlife and timber trafficking. Hal aims to create a field-deployable screening tool that can determine if a product was sourced from an endangered or protected species by looking at the information encoded in its DNA.

From the Clean Room to Conservation

Hal is advised by Karl Böhringer, a joint UW professor of electrical engineering and bioengineering, and conducts research at UW’s Washington Nanofabrication Facility, where Dr. Böhringer serves as director. He is primarily interested in developing micro- and nanosystems for use in biological and environmental conservation applications. The systems could be adapted for other situations where identification of a species is required, such as validating seafood products in a restaurant, identifying contaminated or spoiled products, or verifying crops.

Hal has developed a microfluidic device that can test a sample, such as sawdust from timber, by using miniature water droplets as a vehicle to transport the sample and perform reactions. He has presented this work at the IEEE MEMS and microMAST conferences, filed for a full patent, and currently has a manuscript under review in Advances in Colloid and Interface Science.

Hal’s work brought him into contact with Conservation X Labs, a non-profit conservation technology accelerator. Conservation X Labs was starting a project to develop a DNA scanner or barcoder for species identification. The goal of this project is to enable a field-ready device that could provide a qualitative identification of a target species, serving as a decision support tool for enforcement officials rather than a device with medical-grade accuracy. Hal was invited to a DNA barcoding convention, hosted by Conservation X Labs at the Smithsonian Institution, for his expertise in engineering and microfabrication. After the convention, Hal began working closely with David Baisch, Director of Innovations at Conservation X Labs, applying his technology and expertise to enable the envisioned device.

Hal has recently presented his work with David at a Timber Identification Workshop hosted by the World Wildlife Fund and World Research Institute, and will be rolling out an initial prototype for field-testing with officers in the Washington Department of Fish and Wildlife this fall. After completing his Ph.D., Hal plans to pursue a path in academia and intends to continue collaborating with Conservation X Labs throughout his career.