A team of UW bioengineering and mechanical engineering undergraduates won second place overall – and took home a $15,000 prize – at the National Institutes of Health’s 2020 Design by Biomedical Undergraduate Teams (DEBUT) challenge, which seeks innovative solutions to unmet health needs. This is the first time a BioE team has placed in the top three since the challenge began in 2012.

Samuel Chen, a junior in mechanical engineering, and Ruby Lunde and Abe Wu, both juniors in bioengineering, won for their low-cost device to better detect tuberculosis (TB) using a urine sample.

TB sickens 10 million people every year and kills about 1.5 million, or 4,000 people a day, making it the top infectious killer worldwide, according to the World Health Organization. Although TB can be found all over the world, most people who become ill with TB live in low- and middle-income countries. The best way to detect active TB is by culturing a sputum sample coughed up from the lungs or taken from deep in the throat. It can be difficult for children and people who are immunocompromised to produce a sample.

A lateral flow test, similar to a pregnancy test, to detect TB antigen in urine is cheaper, and a urine sample is easier to collect. However, the current test strips cannot detect the very diluted TB antigen because 95% of urine is water. Samuel, Ruby and Abe had the idea to concentrate the urine, collecting the telltale TB biomarkers and making them an easier target for detection.

In their device, urine is poured into a funnel that is nestled in a cup of water-loving polymer gel. The gel attracts and absorbs the water and draws out urea, which interferes with test accuracy. The water diffuses outward through a membrane until it reaches equilibrium.

In a process that takes just 30 minutes, the urine becomes more than 20 times more concentrated, and a TB antigen, called lipoarabinomannan (LAM), is significantly concentrated for use with the lateral flow test strip.

The osmotic process can also work on other disease biomarkers, so the team hopes to apply their device to improve the diagnosis of other diseases that currently lack a sensitive point-of-care test.

“We are all passionate about resolving this global health issue, so we immediately began to work on a solution to enable point-of-care TB testing in low-resource regions,” says team captain Samuel.

“The team is simply extraordinary”

“The team is simply extraordinary,” says Dr. Lai. “In addition to their motivation, the team is highly interested in making a real impact by understanding the clinical challenge, technical issues, and potential options to make the technology available. The outcome is a device that is robustly engineered by applying principles associated with fluid mechanics, mass transport, polymer chemistry and more. I look forward to continuing the collaboration with the team, so the device will soon be used to improve TB test for point-of-care diagnostics.” 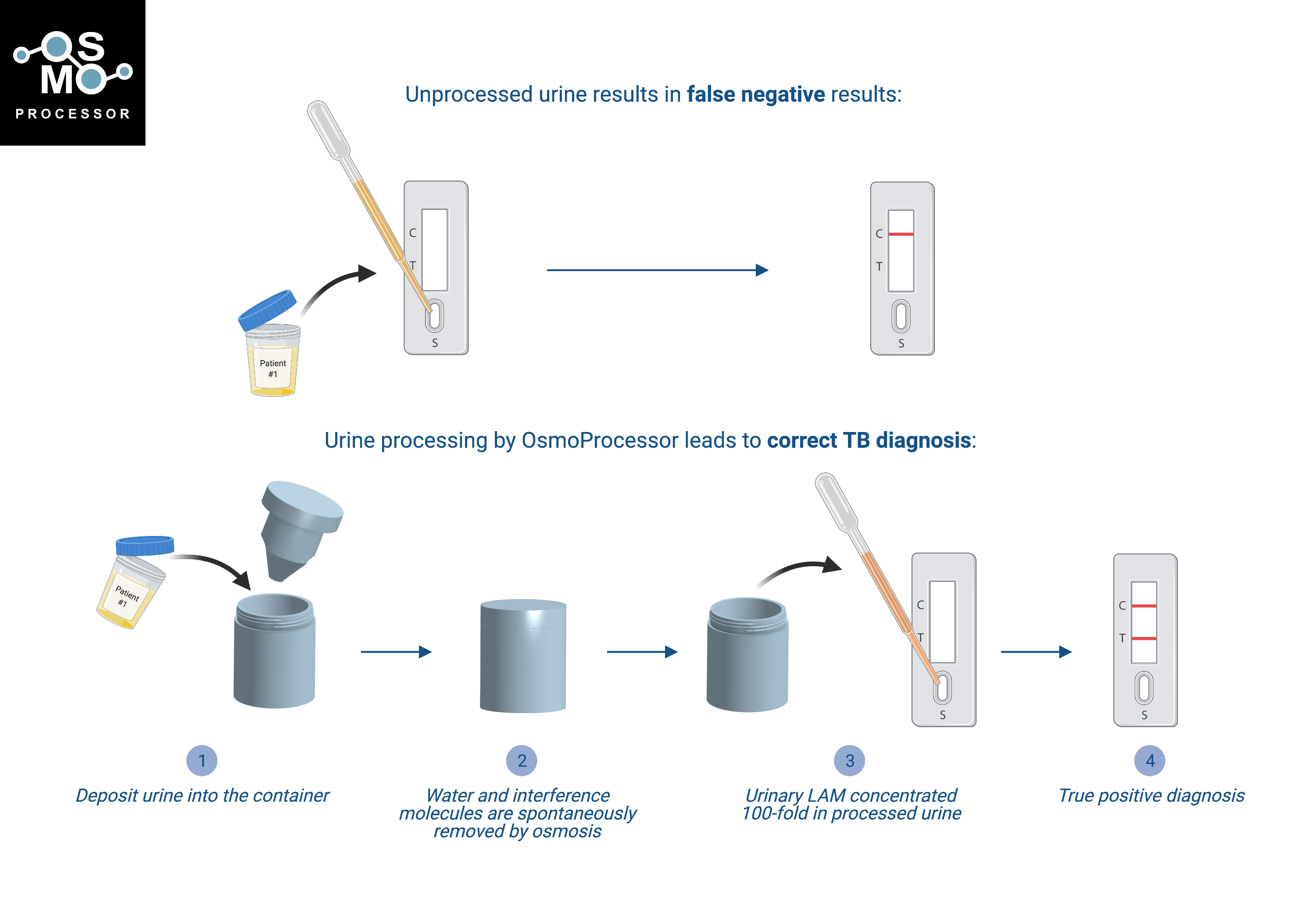 The DEBUT challenge received 86 applications from 46 universities. Judges selected three winning teams for designs that excelled in four areas: the significance of the problem being addressed; the impact on clinical care; the innovation of the design; and the existence of a working prototype. The prizes were awarded at the online Biomedical Engineering Society (BMES) conference in October 2020.

“The winners of this year’s DEBUT challenge show how students with a fresh perspective can develop innovative technologies that are low-cost and simple to use and yet can solve complex health challenges,” said Bruce Tromberg, director of the National Institute of Biomedical Imaging and Bioengineering (NIBIB), in a release announcing the winners. “It is exciting to see the next generation of biomedical engineers tackle these problems and how their unique skillsets and perspectives can make medical technology better, faster and less costly.”

The DEBUT challenge is supported by the National Institute of Biomedical Imaging and Bioengineering (NIBIB), the National Institute on Minority and Health Disparities (NIMHD), and NIH Office of AIDS Research, parts of the NIH, and VentureWell, a non-profit higher-education network that cultivates revolutionary ideas and promising inventions.

Update: The team won a Best Idea prize at the 2021 Hollomon Health Innovation Challenge held March 3 at UW. Samuel, Ruby and Abe have teamed with three UW business school students to further development their product for market. Read more about OsmoProcessor and their latest award.