New 3D model reveals that curvature gives rise to a range of vascular shapes and sizes, important for engineering tissues and understanding disease.

When it comes to engineering tissues and organs, creating a blood supply to nourish them remains a challenge. Another challenge is understanding exactly how blood vessels adapt to changes in their environment, both for healing and in disease. Recent research led by Ying Zheng, associate professor of bioengineering, reveals that the curvature of blood vessels affects the behavior of cells lining the vessel walls. The findings of the study, with lead author and BioE Ph.D. student Christian Mandrycky, were published in September in the journal Science Advances.

As blood pulses through vessels, it often whooshes through a straight passage in an orderly flow. But when it reaches a curve or an archway in the heart, for example, the flow tumbles and swirls in a chaotic mix as it changes course.

Now, for the first time, researchers have recreated a vessel’s curvature and twists in a synthetic, three-dimensional spiral-shaped platform. The corkscrew-shaped system allowed them to study the interplay between small blood vessel twists and turns and the endothelial cells that line vessel walls. The team found that the curvature led to changes in gene expression in endothelial cells, which are pivotal to controlling processes such as blood vessel formation, wound healing, immune function, and blood vessel constriction and relaxation.

Endothelial cells line the entire vascular system, from the heart to the smallest capillary. The cells have receptors that can detect the amount of force exerted as blood flows over their surface. They then signal surrounding cells to adapt the vessel’s diameter and wall thickness in response to the flow.

“The vascular system is full of twists and turns,” says Mandrycky. “As you branch off and go into the organs, blood flow becomes more complicated. Our goal was to generate 3D engineered vessels that reproduce this environment and then see how curvature affects the endothelial cells.”

Red and blue fluorescent bead solutions flowing through a straight vessel stayed parallel to each other (left). A spiral vessel caused the bead solutions to rotate and mix together (right).

The researchers’ 3D spiral model mimics the architecture in the body and created a rotational mixing effect when they passed a solution with fluorescent beads though it. The faster the flow, the more mixing they saw. They also found that cells on the vessel walls in their spiral model registered a change in the blood flow’s force, or shear stress level, compared to a model of a straight vessel. The blood flow created a greater force on the surface of the inner curvature compared to the outer curve, while the shear stress level in a straight tube was uniform all around.

Working with Brandon Hadland, assistant professor of pediatric hemotology-oncology at UW and Fred Hutchinson Cancer Research Center, Dr. Zheng, who is also a faculty member in UW’s Institute for Stem Cell and Regenerative Medicine (ISCRM), and Mandrycky used bulk and single-cell RNA-sequencing methods to identify specific endothelial cell gene clusters in the spiral microvessels. They identified 727 genes that are significantly changed by increasing the blood flow in both straight and spiral shaped vessels, indicating a shared role for shear stress for vessel growth and repair. But they also identified a group of genes found just in the spiral microvessels that turn on and give rise to new vascular growth, and a unique cell cluster turning on genes that control vascular stability. Finding endothelial cells with these sets of genes only in curved, and not straight, vessels, suggests something more than just shear stress may be involved, the researchers say. A combination of varying shear stresses and mixing may lead to a wider range of endothelial cell responses than has been understood before, they suggest.

Mandrycky and Dr. Zheng believe the study provides important insights about why blood vessels come in so many shapes and sizes, and why some vessels grow more and some grow less. From an engineering standpoint, it also gives researchers new design principles for growing 3D tissue in the lab and new ideas about how to potentially treat people with heart disease or other vascular conditions.

In a proof-of-concept experiment, the team used the 3D system to engineer a tumor, which they placed in the middle of the spiral so that it was surrounded by – but not connected to – the blood vessels also present in the model. In this manmade setup, the tumor pulled healthy vessels toward it just as it would in the body.

To further demonstrate that the platform could be used to model complex tissue functions, they also created a vascularized heart chamber in which stem cell-derived heart muscle contracted in the spiral vessels, just as they might in their natural environment.

Looking ahead, the researchers are digging deeper into the actual mechanisms causing behavior changes in the endothelial cells. “We want to know more about the biophysical dynamics at work, what exactly the cells are sensing, and the functional consequences for the cells,” says Dr. Zheng. “We want to learn more about the engineering nature of our blood vessels and to build better models to combat diseases.” 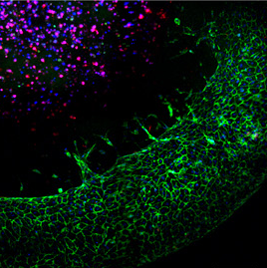 In this proof-of-concept experiment, endothelial cells (green) can be seen sprouting from the spiral vessel toward tumor cells (red/blue) embedded in the center of the spiral and in need of nutrients. 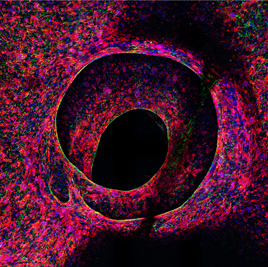 With reporting from an ISCRM news article.