Stroke is a killer, and for those who survive, it can have a devastating impact. According to the World Stroke Organization, the disease is a leading cause of death and disability globally, causing an estimated 5.5 million deaths and 116 million years of healthy life to be lost each year. It is also a very common experience. One in four adults over the age of 25 will have a stroke in their lifetime. So, why is this disease so deadly and debilitating? The answer to that question has to do in part with how stroke can cause the connections between neurons in the brain to deteriorate, break or disappear entirely, often resulting in death, loss of bodily functions and disability. Unfortunately, there is no cure for this disease. But what if scientists and engineers could use neurotechnology, which has shown promise in treating other neurological conditions such as those caused by spinal cord injury, to intervene? Could key neural connections be targeted and induced to heal and repair themselves after a stroke has occurred? 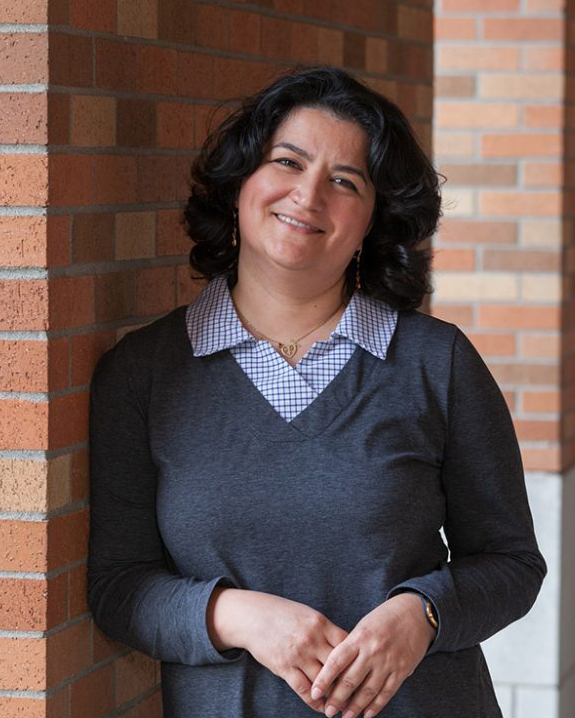 UW BioE and ECE Assistant Professor Azadeh Yazdan recently received a five-year grant from the National Institutes of Health to experiment with using optogenetic stimulation, a cutting-edge neurotechnology, to induce targeted changes in the brain. Her research could lead to better treatments for neurological disorders and diseases such as stroke. Photo by Ryan Hoover

UW BioE Assistant Professor Azadeh Yazdan is investigating possible answers to these questions. Yazdan, who is the Washington Foundation Innovation Assistant Professor of Neuroengineering with joint appointments in Bioengineering and Electrical and Computer Engineering and a member of the Center for Neurotechnology, has several years of research experience studying possible ways to treat neurological disorders and diseases such as stroke.

What happens in a lot of these disorders is that there is aberrant neural connectivity in one or more areas,” Dr. Yazdan said. “For example, if someone has a stroke, they are missing connections between brain areas, whereas if someone has a psychiatric disorder such as post-traumatic stress disorder, they might have connections in the brain that are not supposed to be there.”

Yazdan’s research focuses on using neurotechnology to induce targeted changes in the brain, reorganizing neural pathways in ways that could address these connectivity issues, helping the brain to heal and recover after injury. She recently received a $3.2M, five-year grant from the National Institutes of Health to further advance her work in this area and to specifically study functional recovery following an ischemic lesion in the brain, a condition that is commonly known as a stroke.

“I’m excited to help people who are dealing with neurological disorders, and I think this research could be especially helpful in finding better treatments for stroke,” Yazdan said. “But also, what we learn will have applications beyond stroke. If we can show targeted reorganization in the brain, the knowledge could be used to better treat diseases that are similar to stroke such as traumatic brain injury or cerebral palsy, as well as psychiatric disorders such as depression.”

Yazdan is now in the midst of assembling her research team for work supported by the new grant, and she is recruiting for a postdoctoral researcher and lab technician. Co-investigators on the NIH grant include Amy Orsborn, the Clare Boothe Luce Assistant Professor at UW ECE and the UW Department of Bioengineering, who specializes in therapeutic neural interfaces; Eberhard Fetz, a UW professor of physiology and biophysics, who was one of the early pioneers of brain-computer interface development; and Ricky Wang, a UW professor in bioengineering and ophthalmology.

Co-investigators on the NIH grant include, from left to right, UW professors Amy Orsborn, Eberhard Fetz and Ricky Wang.

“I am looking forward to working with Dr. Yazdan on this exciting project,” Orsborn said. “The work will shed new light on how neurotechnology can be used to rewire brain networks, which will have wide-ranging therapeutic applications.”

Optogenetic stimulation of the brain

For her NIH-funded research, Yazdan will primarily be using optogenetics to stimulate neurons in the brain instead of electricity, which is currently the go-to form of brain stimulation for neural engineering. Optogenetics is a technology that uses light to activate and inhibit neurons, and although it has been around for several decades, it is a relative newcomer to neurotechnology. Optogenetics has the advantages of being more precise and controllable than electrical stimulation, and it will allow Yazdan and her team to tease apart complicated neural circuits in ways that will be useful for better understanding neural network connectivity.

“With optogenetics, we have the capability of recording during the stimulation period to see how the neural network is evolving, and what neural changes can lead to functional changes and recovery through simultaneous behavioral measures,” Yazdan said. “Following a lesion in the brain, we can measure a behavioral deficit, and we can also measure neural and functional recovery as a result of our stimulation parameters.”

This illustration shows targeted reorganization of the brain using optogenetics, a cutting-edge neurotechnology that uses light to activate and inhibit neurons in the brain. Far left: An area of the brain is targeted for modification. Center: The targeted area of the brain is illuminated to control the activity of underlying neural circuits using optogenetics. Far right: A demonstration of how connectivity between two neurons can change following optogenetic intervention. Note the subtle change in the connecting line between neurons. It brightens, showing that the neural connection has strengthened. Illustration provided by Azadeh Yazdan.

Yazdan has been working for several years developing optogenetic tools capable of giving more precise and cell-type specific manipulations of the brain, as well as interfaces that can enable scientists and engineers to manipulate and record from large areas of the brain. Concurrent with her NIH-funded research, she is co-leading a multi-institutional effort to develop a ‘smart dura,’ a device that has the capability to perform optogenetic stimulation and also allows unprecedented large-scale access to the brain. The smart dura will enable Yazdan and her research team to record and manipulate neural network activity with unmatched, high resolution.

“The brain network structure is actually a big mediator of the changes that we’re seeing. There are no two people who have the same stroke and the same damage,” Yazdan said. “So, in this grant, we’re also including the network structure information into the design of our stimulation protocols. For future stroke therapies, you can imagine that brain stimulation protocols could be customized to a patient’s stroke.”

What the future holds

By the end of the five-year NIH grant, the research team is aiming to establish a proof of concept that demonstrates the effectiveness of refined brain stimulation patterns for targeted neurorehabilitation and ‘rewiring’ of the brain. Their work will also help scientists and engineers better understand neural circuits and connectivity in the areas of the brain that are studied.

“We have about one billion people worldwide that suffer from some kind of neurological disorder. In this research, we will learn much that could help us improve current brain stimulation-based therapies.”  – Azadeh Yazdan

Yazdan said that long-term goals for this line of research depend in part on what the team discovers over the next five years. But because her team is studying functional recovery following stroke, she is hoping that she can pair up with clinicians to apply some of their research findings in a clinical setting. She is also interested in expanding the focus of the research to encompass other neurological and psychological disorders.

“A long-term goal that I have is to see how we can manipulate the brain and induce these targeted changes, which could be used for treating different neurological disorders, beyond stroke,” Yazdan said. “This grant will be a really good first step for that.”

She also noted that because much is still unknown when it comes to neurological disorders and diseases such as stroke, it has historically been difficult for scientists and engineers to develop effective treatments.

“We have about one billion people worldwide that suffer from some kind of neurological disorder. In this research, we will learn much that could help us improve current brain stimulation-based therapies,” Yazdan said. “This work could also open up a lot of opportunities for us to understand the brain and its response to stimulation. Basically, it will help us to better understand how to induce these targeted changes to the brain in ways that could potentially cure someone.”

For more information about this research, contact Azadeh Yazdan.