Bioengineering alumnus Michael Garrison (Ph.D. ’99) has received the UW College of Engineering’s 2016 Diamond Award for Distinguished Achievement in Industry. The Diamond Awards recognize alumni and friends of the University who have made significant contributions to the field of engineering. He was honored May 20 at a ceremony in Seattle.

In the 16 years since earning his Ph.D., Dr. Garrison’s career has grown and evolved steadily, as he developed and launched medical products engineered to improve health care safety, disease management and infection prevention for providers and patients around the world.

In nominating Dr. Garrison for the Diamond Award, Matt O’Donnell, Frank & Julie Jungers Dean Emeritus and professor of bioengineering wrote, “What Mike has done that is very rare and worth recognition is to combine his deep technical knowledge developed during his Ph.D. studies at UW with his business instincts to focus on products that can change the human condition. As bioengineers, we often talk about translating technologies to the clinic to serve humanity.… Mike has done this over and over again in a relatively short career.”

Dr. Garrison came to the UW with a master’s in biomedical engineering from Duke University and having spent a few years in industry at Cygnus Therapeutic Systems, where he led the technology transfer of transformative technology to allow diabetes patients to non-invasively monitor glucose levels.

Michael Garrison was a standout student, says Buddy Ratner, the Michael L. & Myrna Darland Endowed Chair in Technology Commercialization and Dr. Garrison’s Ph.D. thesis adviser. In his nomination letter, Dr. Ratner cited his exceptional leadership ability, excellence in research, vision, and his ability to solve complex problems by making creative connections. “He brings credit to our College and our University every day through his technical excellence, humanity, and strong sense of fairness and justice,” he wrote.

Following graduation from UW, his career trajectory focused on making an impact. He took a position with Roche Diagnostics, which led to a global marketing and business development role building on his technical expertise. Within the first three years of earning his degree, he developed a number of significant technologies, including the first handheld computing glucose module with integrated mobile diabetes management software.

He then moved to Edwards Lifesciences to improve cardiovascular care by leading development of surgical heart valve products and developing less-invasive technologies to monitor critically ill patients. While at Edwards, he helped develop and launch the Flo-Trac Cardiac Output Monitoring System™, now used to monitor more than 1.5 million patients.

In 2005, he joined BD, where he began a series of high-impact product development and deployment projects focusing on safety-engineered hypodermic needles and syringes for use in a range of settings around the world. Over the next decade, he built organizations as an R&D leader and general business manager. He actively led innovation for dozens of product lines, including the BD Emerald™ family of syringes, which enabled more than one billion safe injections in the first two years. He also oversaw the development and launch of the BD SoloShot Mini™, including its use in the meningitis vaccine program in sub-Saharan Africa, and the vaccination of the population under age 6 in Haiti. The BD SoloShot™ product line has been used to safely vaccinate billions of people around the world.

His skill in building high-performance teams and developing relationships led to successful projects that helped people around the world. Dr. Garrison built relationships with the Centers for Disease Control, UNICEF, the Indian Academy of Pediatrics and others to develop safe and reliable drug delivery systems, and he applied BD resources to address humanitarian crises in Africa, Pakistan, Sumatra, Japan, Haiti, China, and the U.S. During the 2009 H1N1 pandemic, he and his team at BD received recognition from the U.S. government for U.S. Pandemic Preparedness efforts.

With more than 400 worldwide employees under his leadership, Dr. Garrison now drives research and development for BD’s $3.5 billion Medication and Procedural Solutions business unit. He oversees all aspects of strategic innovation, technology development, execution and delivery, and product engineering.

Dr. Garrison also serves as an affiliate associate professor in bioengineering at UW, a visiting lecturer for UW’s Program in Technology Commercialization (PTC) and as director of UW Bioengineering’s External Advisory Board. “In lecturing in our PTC classes, the students are simply in awe of Mike,” Dr. Ratner wrote. “His presentation style is quiet, and strikingly charismatic. The depth of experience he relates to the students and his understanding of technology delivery, particularly in low resource settings, make his lectures memorable and moving.”

UW Bioengineering recently talked with Dr. Garrison about his time at UW and how it prepared him for his career. 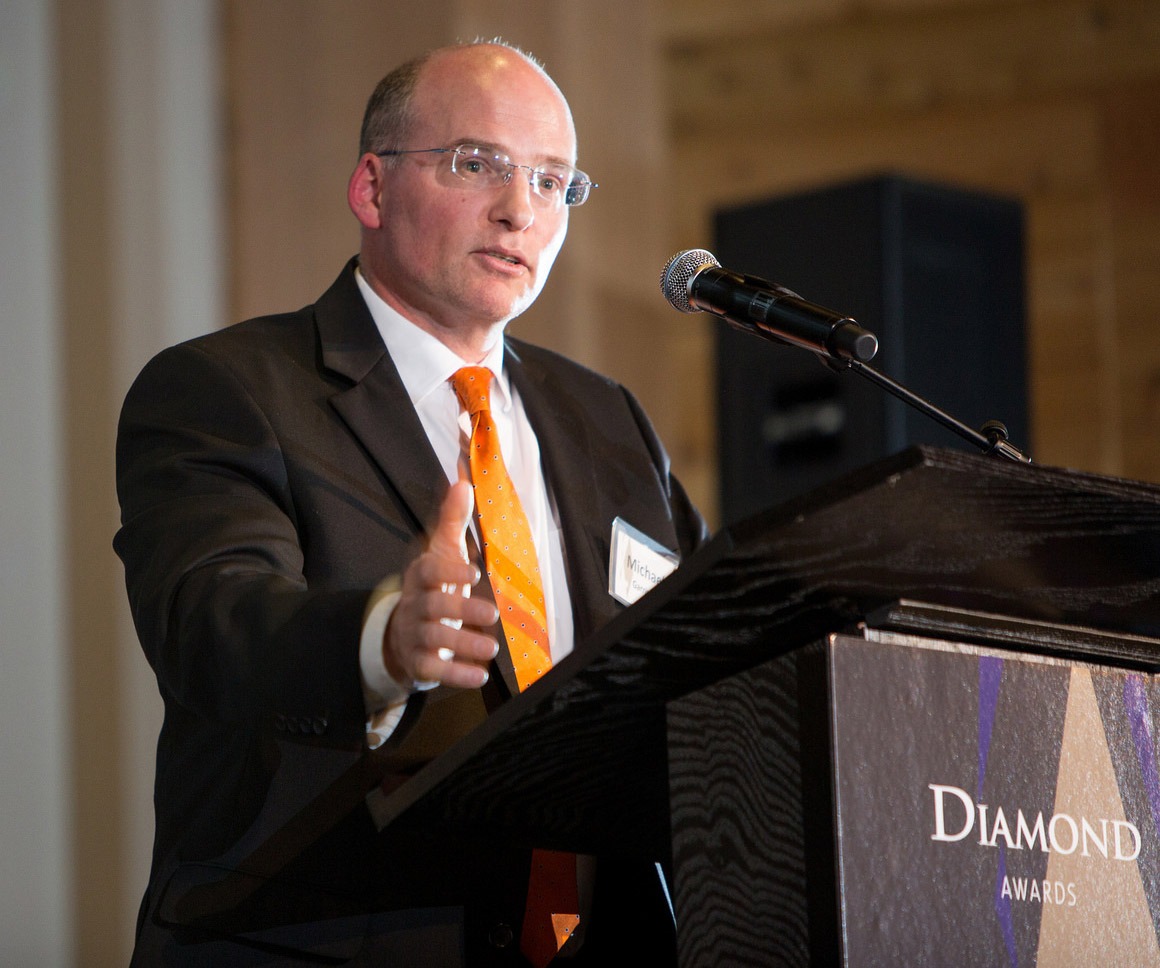 I was really thankful for the Diamond Award. I felt like it was a good mid-career checkup that things were going OK, and I’ll keep working so that my final exam is good as well. I feel like I contributed a little bit, but mainly it was everybody else helping me, so I’m just really thankful for all those other people who have helped out along the way – the University, the College of Engineering, and all the teams and mentors that I’ve had over the years.

What was your motivation for getting into your career?

My dad had a heart attack when I was 11 years old, and he was 30 at the time. I felt like I wanted to do something to fix whatever that problem was with my dad. That led me into science and math, and then I chose the biomedical engineering program at Duke. I wanted to influence cardiovascular medicine. My dad’s had five heart attacks, a heart transplant, and numerous technologies and medicines that have kept him alive multiple times. It’s allowed him to see his kids grow up, get married, have grandchildren and to dedicate his life to service to others, and I like to try to transmit that to other people and turn them into forces of good.

You have continued to evolve in your roles. What excites you about what you do now?

Recently, it became: How do I build an organization? Because I can only do so much myself, with my small teams. I went from making heart valves and critical care devices that help tens of thousands of people per year to making drug delivery products here at BD where we make tens of billions per year. So it’s the ability to impact nearly every corner of the world. Regardless of race, color, creed, location of birth, or socio-economic status, it doesn’t matter – everybody’s pretty much the same – they want to be healthy and they want their loved ones to be healthy. So my ability to do that, and the way the industry provides the vehicle to do that, is what excites me about my job.

What did you gain from your time at UW Bioenginering?

I was the first student matriculated under the UW’s NSF Engineered Biomaterials Engineering Research Center led by Buddy Ratner. I was involved with grant writing, grant review, setting up engagements with industry and with NSF report-outs. I had worked in industry for a couple of years before coming back to get my PhD, so I had a little more focus and project management skills, and I tended to mentor students that Buddy brought in. I got to see how Buddy ran the organization, which gave me a lot of insight into how I might want to structure a group. Try not to be judgmental with students who are in a different phase of their maturity – find ways help develop them and put effort into how to identify talent in people who are still a little rough around the edges.

My wife and I had both kids while we were at UW, and so the real life of doing research, writing your thesis and balancing it with a toddler and a newborn was some of the best times of our lives. We were hardly wealthy on a graduate student’s stipend, with two kids trying to get by in Seattle, but we were so happy. The environment there was such that it made you value the science, it made you value the engineering. It was very supportive – if you needed to take time with your family you took it. There was a lot of independence. I was really appreciative of the whole group and the support structure with Buddy and Tom Horbett, Pat Stayton, Paul Yager and Dave Castner, where they allowed me to go at my own pace. (Which was pretty fast – I finished in three and a half years.)

Do you have advice for students?

Practice being an active learner. There’s no substitute for getting into the field and absorbing all there is to learn. Whether that’s doing research with a clinician at the hospital, or getting into a lab and doing an industrial summer internship, or going to a different group to learn a new set of skills, there is no substitute for the “dirt under the fingernails.” My experience has been that that dirt under your fingernails, over time, magically turns to diamonds, and then you use a piece all the time, you draw back on those experiences, those memories. You observed something, you watched something, you heard something, asked a question, you got an interesting answer. I really encourage everybody to take some time to spend with clinicians, with customers, be out in the field so you really understand the problem you’re trying to solve. There’s no substitute for that. I encourage that experiential learning as opposed to just being in the lab and doing the experiments. It has to be both.

How do you spend your free time?

I exercise, I run marathons

[seven marathons in the past five years, including the New York Marathon to support research on Tourette syndrome] and I do mud-runs from time to time. I’m really involved with my family. That said, the reality is I probably do let work consume too much time, and my family acts as a great balance for me to keep me humble and grounded.
2020-10-26T08:29:55-07:00June 8th, 2016|