This May marked the 10th anniversary of the UW’s Coulter Translational Research Partnership in Biomedical Engineering, which has helped propel dozens of UW inventions from the lab to clinical use. The UW was one of 10 universities selected to pioneer the program, which funds projects that address unmet clinical needs in patient care. Two of Coulter’s most recent successes come from the Department of Bioengineering, with technologies that have spun out into Nexgenia and NanoSurface Biomedical. Read more about the Coulter program and Nexgenia in Part 1.

In part 2 of the series, BioE eNews looks at the department’s newest start-up, NanoSurface Biomedical.

UW bioengineers have developed a new cell growing surface technology that lets them grow heart cells in a way that better mimics real human heart tissue. The technology could be used as a drug-screening tool to more accurately identify compounds that have toxic effects on the heart. The testing system could help ensure the safety of new drugs advancing to human clinical trials and substantially speed their time to market.

Until a decade ago, fatal heartbeat arrhythmia was a leading cause of drug failure in clinical trials and of approved drugs being withdrawn from use. The U.S. Food and Drug Administration (FDA) now requires new drugs to undergo rigorous safety testing prior to trials in humans. However, current preclinical tests for cardiac toxicity typically use non-heart cells to predict which drugs might cause arrhythmia. Because the substitute cells do not have the full range of ion channels present in native cardiac cells, these conventional tests often produce inaccurate results. False negatives send dangerous drugs into use among patients, and false positives block safe drug candidates from getting to patients they might help. Recent research has shown that many rejected compounds do not actually promote arrhythmia, and suggest patients may have benefited if they had been brought to market.

Researchers are working to develop drug screening systems using human heart cells, but a major barrier is that these cells, developed from human stem cells, fail to mature enough in culture, making it hard to effectively model how adult heart tissue responds to new drugs.

To combat these maturity issues, Deok-Ho Kim, UW assistant professor of bioengineering, and his team engineered a new synthetic surface with nanoscale ridges and seeded it with immature human cardiac cells, reprogrammed from stem cells. In this system, the nano-grooved surface cues the cardiac cells to organize and mature into a layer of human heart tissue that can be used to determine toxic effects of new drugs more accurately.

“It’s not enough to create a tissue that is ‘mature’; it also has to be usable for drug screening and disease modeling,” says Dr. Kim. The tissue needs to be held in a configuration that enables drug developers to take measurements reliably and reproducibly, and to screen multiple compounds at once, he says, something they are addressing now. Dr. Kim is part of a consortium of worldwide scientists from academia, the pharmaceutical industry and the FDA working to establish a new standard test using a human stem cell-based platform.

In 2012, funding from the Coulter program helped Dr. Kim and clinical collaborator Michael Laflamme, UW associate professor of pathology, test their concept. “The Coulter grant allowed us to fabricate and test a prototype device,” Dr. Kim says. Funding from CoMotion at UW and the Life Sciences Discovery Fund followed, which led to two full patent applications based on different aspects of the technology. 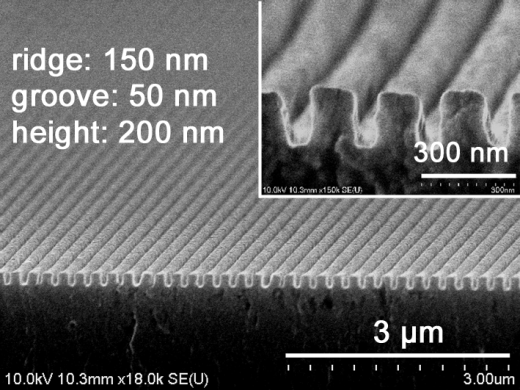 To help develop the nano-groove surface technology and move it toward clinical impact faster, Dr. Kim and some of his team members recently incorporated a startup company, NanoSurface Biomedical, on March 2. “Our technology is very cost-effective, scalable and robust,” says co-founder Dr. Kim. “The Coulter grant allowed us to keep making progress for commercialization. Our Coulter and CoMotion advisers helped a lot because we met regularly to discuss the best commercialization path and strategy, business advice and how to make our intellectual property

[IP] stronger. Most other NSF and NIH grants don’t have this kind of requirement and support, so the Coulter support was critical at that stage of our IP generation.”

The team also is developing a related technology in which they layer a heat-sensitive chemical coating on top of the nano-patterned surface. Manipulating the temperature allows the researchers to detach and stack sheets of cells grown on these surfaces, providing a non-invasive way to make scaffold-free, 3D complex human heart tissue for further study.

“The hope is to accurately identify which drugs are safe early on during development, and ensure that those compounds that progress to more costly clinical trials have the best possible chance of achieving FDA approval,” says Dr. Alec Smith, a post-doctoral fellow in Dr. Kim’s lab, who also serves as the acting Chief Scientific Officer of NanoSurface Biomedical. “We also hope to rescue some abandoned compounds that failed to pass conventional screening assays by demonstrating their safety in mature human cardiac cells,” he says.