Nancy Allbritton, University of Washington College of Engineering dean and professor of bioengineering, received the 2021 Robert A. Pritzker Distinguished Lecture Award, the premier recognition by the Biomedical Engineering Society (BMES) for outstanding achievements and leadership in the science and practice of biomedical engineering. She accepted the award and presented the Pritzker Distinguished Lecture Oct. 7 in Orlando, Fla., at the BMES annual meeting. 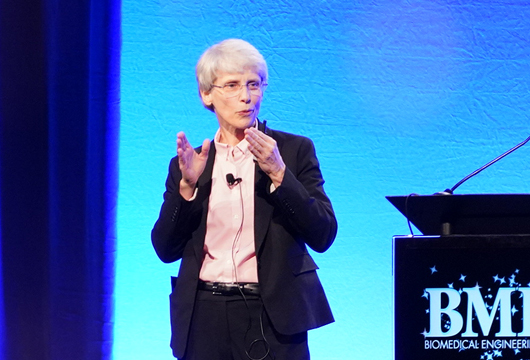 Dr. Allbritton’s research focuses on biomedical microdevice development. She is an international expert on multiplexed single-cell assays, microfabricated platforms for high-content cytometry combined with cell sorting, and microengineered stem-cell-based systems for re-creating human organ-level function. Her work has resulted in 45 issued and pending patents and led to 15 commercial products. She has co-founded four start-up companies based on her research discoveries: Protein Simple (acquired by Bio-Techne in 2014), Intellego, Cell Microsystems and Altis Biosystems.

She has been nationally recognized for her research and is a Fellow of the American Association for the Advancement of Science, the American Institute for Medical & Biological Engineering and the National Academy of Inventors.

Dr. Allbritton, Ph.D., M.D., is the Frank & Julie Jungers Dean of Engineering, serving as the chief academic officer of the college and providing leadership to over 279 faculty and more than 8,000 students.

Prior to joining the UW, Allbritton led the Joint Department of Biomedical Engineering at the University of North Carolina at Chapel Hill and North Carolina State University, which spans two universities and three colleges.

This is the second time a UW Bioengineering professor has received this honor. Buddy Ratner, the Michael L. & Myrna Darland Endowed Chair in Technology Commercialization, a biomaterials pioneer, was the 2008 recipient.