Adapted from an ISCRM article. Above image by Caitlin Howard.

Tissue engineers are growing more adept at creating 2D and 3D constructs that allow scientists to study organ and tissue functioning, model diseases, or test potential new drugs without involving humans or animal subjects. While the technology is growing more sophisticated every year, tissue engineers are constantly encountering and overcoming new obstacles as they attempt to match the natural structure of human tissues.

One major challenge has been to engineer microvasculature, the dense bed of capillaries that move blood, oxygen and nutrients in and out of organs, each with its own unique, confounding complexity. The heart cannot pump, the kidneys cannot filter, and the brain cannot think without the capillaries that support their continuous functioning.

Ying Zheng, associate professor of bioengineering and faculty member in the Institute for Stem Cell and Regenerative Medicine

Ying Zheng, an associate professor in bioengineering and faculty member in the Institute for Stem Cell and Regenerative Medicine (ISCRM), is responsible for several recent advances in tissue engineering, including a breakthrough in the ability to engineer capillaries and new models to study how cells that line blood vessels respond to curvature.

Now, Dr. Zheng and her lab have pushed the limits of tissue engineering a step farther with a technique that replicates microvasculature in full 3D complexity using multiphoton ablation and laser-guided cellularization. The details of the breakthrough appear Feb. 15 in the journal Advanced Healthcare Materials.

In multiphoton ablation, scientists use laser pulses to carve three-dimensional channels into collagen, creating negative spaces that will become tiny vessels populated by billions of cells. To overcome the challenges of seeding these channels with living cells in 3D, the researchers designed a technique known as laser-guided angiogenesis to guide cell growth along the vessel walls.

When the two methods are combined, the result amounts to a leap forward for tissue engineers: an ability to create organ-specific microvasculature, complete with the geometry, heterogeneity, blood flow dynamics, and cellularization of the real thing, all at anatomic scale. 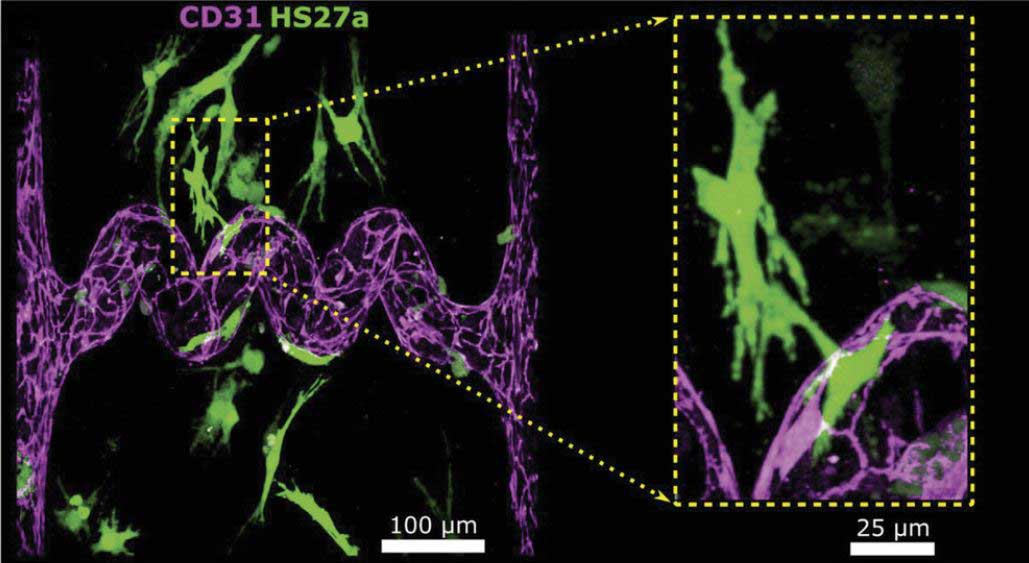 To demonstrate proof-of-concept, Dr. Zheng and her team used their approach to create organ-specific microvascular structures similar to kidney and lung tissue. In collaboration with the Andy Shih lab at Seattle Children’s Research Institute, they were also able to accurately recreate brain vasculature imaged from in vivo.

More importantly, the researchers successfully generated the very first endothelialized 3D glomerulus (kidney structure) capillary bed, which would not have been possible without the fine control of multiphoton ablation and guided endothelial cell growth under hydrodynamic pressure.

The investigation was co-led by Samuel Rayner, M.D., a senior fellow in the Zheng lab and a UW Medicine pulmonologist and critical care medicine physician. Dr. Rayner, who worked alongside graduate student Caitlin Howard, and postdoc Christian Mandrycky, speaks to the promising outcomes of the research: “Making blood vessels at the human capillary scale has been a challenge for the field, and I hope these methods can be used to model human vascular disease and create more complex tissues in the lab.”

“This is an important step for tissue engineering,” says Dr. Zheng. “Creating organ-specific vasculature is now real. As a next step we would like to establish some of the functions of these vasculatures, for example by building real glomerular filtration barriers. We want to use these systems to build complex tissues and model vascular diseases. The possibilities are enormous.”