As she was finishing high school in her native Thailand, Nuttada Panpradist faced a choice: She could pursue her interests in petrochemical engineering or fashion design. She opted for engineering, but she has found a way to imbue her eye for design and creativity in all her projects.

“I learned to compromise,” says Panpradist, who is now a postdoctoral fellow in bioengineering with experience pioneering several new technologies. “I channeled my love of drawing into making figures for publications, and my love for building into solving the complexity of molecular diagnostics.” 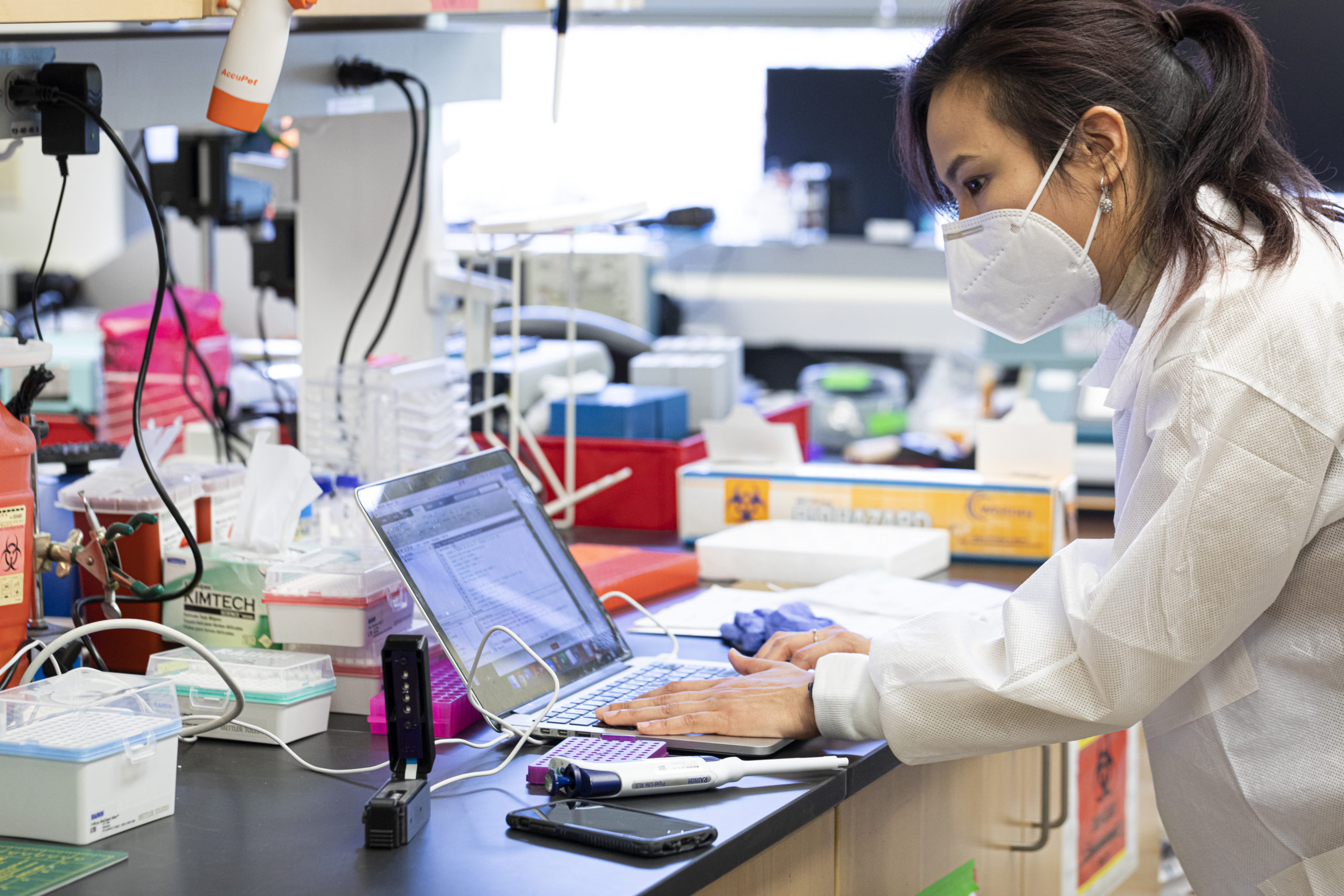 Nuttada Panpradist, Ph.D. student in the Lutz Lab, works to develop an at-home COVID-19 test in 2020.

During her time as a Ph.D. student in UW Bioengineering – she completed her degree in December ’21 – Panpradist has developed successful rapid tests to detect HIV, tuberculosis and drug resistence, and most recently, tests for COVID-19, including one that is now being commercialized. She has published one book chapter and co-authored 21 publications – eight with a lead role as first author – with more in the works. She has collaborated with clinicians around the world and is an award-winning mentor and role model for women in engineering.

Panpradist’s passion for health equity is tied closely to her experience in her native Thailand.

She earned a bachelor’s of engineering in petrochemical and polymeric materials in Thailand, but found limited job prospects – in Thailand at the time, engineering positions often explicitly excluded women. Instead, she took on a role in medical sales and discovered that she kept thinking up ways to apply her engineering skills to health care. Soon she was bound for the U.S. with the goal of a bioengineering degree and making health care accessible and affordable, no matter where one lives.

To bring herself up to speed, she earned certificate degrees in pharmacy technology from Pima Medical Institute and in nanotechnology from North Seattle Community College. At UW, she landed an internship in BioE Associate Professor Barry Lutz’s lab. “It was clear she belonged in a Ph.D. program,” Lutz says. “She had infectious enthusiasm, tenacious thirst for knowledge, strong ability for research and very high productivity.”

Panpradist joined a project to develop a simplified HIV drug resistance test, a collaboration between Lutz, Lisa Frenkel, a Seattle Children’s and UW professor of pediatrics and laboratory medicine, and James Lai, bioengineering faculty at the time. They were funded by Global WACh – the Global Health of Women, Adolescents and Children program in the UW School of Public Health. Inspired by this multidisciplinary collaboration, Panpradist wanted to learn more about global health and became the first BioE student to earn a UW graduate certificate in Global Health of Women, Adolescents and Children (Global WACh). During that time she collaborated with public health student Diana Marangu, a clinician in Kenya, and UW colleagues to design a rapid, instrument-free test that could detect TB in urine samples, winning a seed grant from Global WACh/W.H. Coulter Foundation. In addition to working with her student peers, Panpradist also  initiated a collaboration with her guest co-lecturer in a Global WACh class, Dr. Silvia LaCourse, to develop a TB drug adherence test. 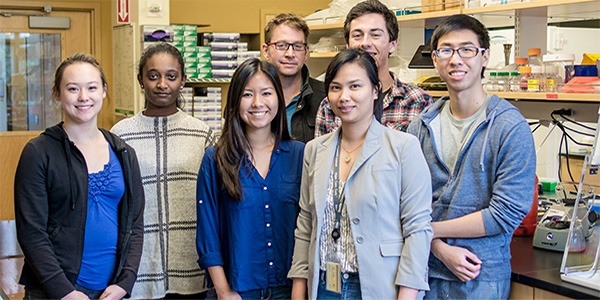 But Panpradist kept thinking about the HIV test. She wrote a proposal and received funding to build a prototype for a new version of the HIV drug resistance test, called OLA SIMPLE 2.0. It is a credit card-sized device capable of detecting HIV only five days after possible infection and giving results in about one hour. It also looks for drug resistance to anti-retroviral medications. In a 2016 two-phase national competition, Panpradist’s pre-proposal won $10,000 to build a functioning prototype, collect preliminary data and put together a “mini NIH ‘R01’ grant application.” She went on to win the $50,000 3rd place prize in the national APF Student Technology Prize competition. She was the first UW student recipient of an APF Student Technology Prize.

“It was a fun experience to brainstorm and tackle real-world design challenges with my student mentees,” she says. “During this period, we achieved significant milestones in all the areas that we had originally proposed.”

“I could not be prouder of the strong student team I had built,” Panpradist says. “Regardless of whether we won the prizes, I found these activities help us strengthen the bonds between team members and improve leadership skills in individual members.”

Some of Panpradist’s many other accomplishments include the Husky 100 honor, which recognizes students who are making the most of their time at UW, the UW College of Engineering Student Research Award, and the UW Medicine Graduate Discovery Fellowship to work at Stanford. She also represented the UW for the national HHMI International Student Research Competition twice and received a $2,500 UW CoMotion National Science Foundation Innovation Corps (I-Corps) award.

More recently, Panpradist has helped lead development of low-cost, rapid COVID-19 tests. One molecular test, called Harmony, gives PCR-quality results in about 30 minutes. That low-cost, easy-to-use test is now being commercialized. She was also part of a team that created a method to detect the COVID-19 virus in air filters of transit buses to aid in monitoring community transmission.

“The pandemic has really been challenging, but it made me feel that finally my training could make a global impact beyond HIV,” Panpradist says. She decided to email researchers asking to collaborate with them on developing other SARS-CoV-2 related technologies. Soon she had initiated synergistic partnerships with 10 different organizations outside UW. Her multi-disciplinary collaborators included Fred Hutch, Stanford University, Harvard University, Duke University, and Georgetown University, and span the globe to organizations in Mexico, Brazil, UK, South Africa and Zimbabwe.

She hopes her experience might motivate other students to take a similar kind of chance. “So long as one is willing to take initiative, one can make a senior-level impact even as a student,” she says.

“Nuttada is a natural leader and deeply thoughtful and kind. She brings out the best in people around her, from mentees to colleagues.” – Barry Lutz, associate professor of bioengineering

After she finished her Ph.D., Lutz, her adviser, reflected on her presence in his lab. “Without Nuttada, I might not be a faculty member today,” Lutz says. “She was the seed that grew our collaboration with Lisa Frenkel that became a critical area of research and helped me establish independence as a new faculty member.”

Lutz says in his early career, Panpradist’s work and her accomplishments became the centerpiece of his group, and she even mobilized people to help recognize him through awards. In addition to her own project, she seeded several research collaborations that became “significant projects in our group,” he says. “Nuttada is a natural leader and deeply thoughtful and kind. She brings out the best in people around her, from mentees to colleagues.”

“Being a professor, you can have it all.” 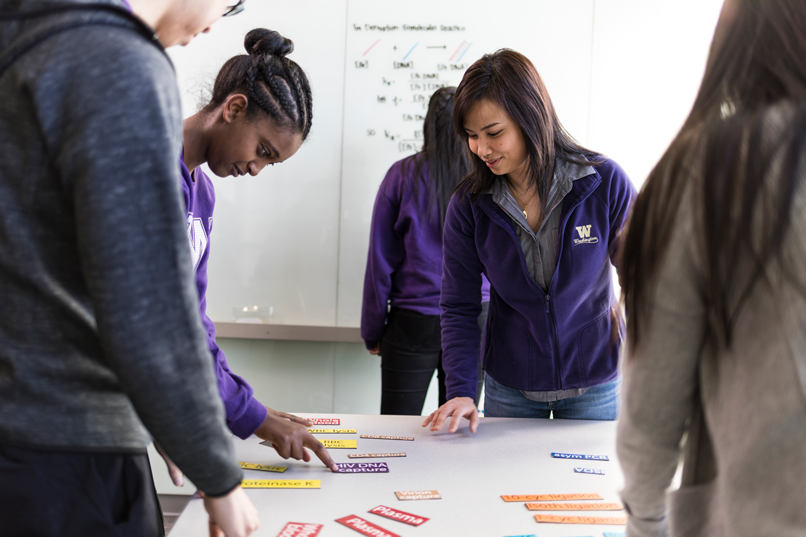 Nuttada Panpradist with her undergraduate mentees in the Lutz lab.

Now that’s she’s completed her Ph.D., Panpradist’s next goal is a university faculty position, a role that she says will unite her three passions for medical science, technology development and education. “Being a professor, you can have it all.”

In addition to guest lecturing multiple courses in bioengineering and global health, which gave her the chance to try out new teaching methods to maximize her students’ engagement, mentoring one-on-one allowed her to help students achieve their professional and personal goals. “Teaching is the best platform to instill the ideas of inclusion and diversity in the next generation of scientists, engineers and global health leaders,” Panpradist says. She received the 2015 BioE Outstanding Graduate Student Mentor award and in 2016, the UW recognized her with the Undergraduate Research Mentor award.

“It is an amazing and rewarding feeling to watch students grow: One day you are teaching them all the basic tools and before you know it, they are teaching you and knowing more than you,” she says.

That’s a feeling that her adviser, Lutz, recognizes. “She has been the heart and the leader of our group during her Ph.D.,” he says. “But, perhaps the most amazing is how much I learned from Nuttada by watching how she worked with students and collaborators to motivate, inspire and reward them both through her personality and through intentional practices, and she often gave me advice that shaped my approach to research and mentorship. Especially in recent years, I have been learning more and more from her.”

As her adviser, Panpradist credits Lutz with shaping her to become independent and academically confident, and supporting her through ups and downs. “Over the past decade, Barry was a critical figure in my professional development,” she says. “He is a golden example of patience, resilience and collaborative mindset.” His resilience encouraged her when facing inevitable failures. “It was disappointing when I learned that none of my four fellowship applications were funded at the national level,” she recalls. “Still, later I learned that one has already accomplished the first step by putting oneself outside the comfort zone. The outside critiques are additional motivations to improve oneself, not a reflection of lifetime incompetency.”

When Panpradist thinks ahead to the future of bioengineering education, she gets excited about the opportunities for the bioengineering community to become more integrated with global health. “I was privileged to have been exposed to both bioengineering and global health (Global WACh),” she says. “Through this classroom experience either as a student or a lecturer, I came up with several creative ideas that led to four new projects in the Lutz lab. I can see us being able to make more impact in the forefront of education and research if we can create an environment conducive to innovation – such as a think tank class, a lab for everyone without prerequisites – in which the members from both departments can engage and exchange ideas to develop solutions for global health.”

Inspiring the next generation of female scientists around the world

Whether she was visiting her home in Thailand or presenting at international conferences in South Africa, Panpradist would take time to visit neighboring universities; she saw it as a way to reach more students. She gave lectures to students pursuing degrees in different disciplines with a primary goal of introducing them to bioengineering and explaining how diversity and inclusion influence innovations. She encouraged them to use their knowledge to tackle global health issues.

“These students often don’t have opportunities to attend international conferences or can’t afford to pay the fees of research articles,” she says. “I shared the story of my path to engineering and global health to support female scientists and engineers who sometimes struggled to express their own scientific opinions and did not feel they had the right to have a dream and pursue it,” says Panpradist.

To learn more about Nuttada Panpradist and her technical and creative pursuits, visit: