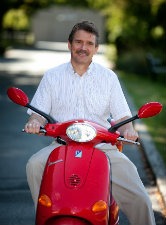 How I am inventing the future of medicine

Since 1996, the Murry lab has worked to understand the mechanisms that underlie cardiovascular disease and to develop new treatments. We have a longstanding interest in the biology of myocardial infarction (heart attacks), and in particular, how the heart heals after infarction. The lab has a major focus in stem cell biology and tissue engineering, where we seek to understand the molecular basis for cardiovascular differentiation, and to harness the potential of stem cells to repair the heart.  We are one of the leading groups in the use of human pluripotent stem cells for heart regeneration.  Our current work is focused on non-human primates, and we are moving toward therapeutic trials in human patients.

Recently, our group has begun to use stem cell approaches to study genetically based cardiomyopathies. We are deriving induced pluripotent stem cells (iPSCs) from patients with cardiomyopathy, and using cell biology and tissue engineering for “disease in a dish” studies.  Our current foci are on disorders involving mutations in myosin (MYH7) and myosin binding protein-C (MYBPC).

Overview
Myocardial infarctions (heart attacks) are the number one cause of death in the industrialized world. Infarcts occur when a coronary artery becomes obstructed, resulting in the rapid death of myocardium from ischemia (deficiency of blood flow). The heart has no significant intrinsic regenerative ability. As a result, infarcts heal by scar formation, and many patients suffer from heart failure after an infarct. Our group is interested in the biology of myocardial infarction, both in defining the molecular mechanisms that underlie the heart’s normal wound healing processes and in developing molecular and cell-based approaches to improve infarct repair. We are a multidisciplinary group, doing basic work in molecular biology and regulation of gene expression, cell biology, tissue engineering, mouse models of disease, and analyses of human tissues. The following serves to highlight some of the work underway in the lab.

Stem Cell Studies
Our lab is working with both adult and pluripotent (embryonic and iPSC) stem cells, with an aim to develop cellular approaches to regenerate the heart. Our work in adult stem cells is focused on creating transgenic/knock-in mice to track progenitor cells in the heart. We will use genetic pulse-chase techniques to mark candidate progenitor populations and then follow their appearance into other compartments of the heart such as muscle cells or blood vessels. We are working with mesenchymal stem cells to enhance survival of transplanted cardiomyocytes via paracrine signaling pathways. Pluripotent stem cell studies are focused on molecular pathways involved in cardiovascular differentiation, including the use of high throughput sequencing to understand chromatin remodeling and transcription factor binding. We recently identified key roles for signaling through Wnt and VEGF pathways in determining cardiac, smooth muscle and endothelial fate. We are also using these early cells to repair the infarcted heart via cell transplantation and have shown that stem cell-derived human myocardium prevents development of heart failure after experimental infarction. Recently we have succeeded in partially regenerating the hearts of non-human primates, and we hope to translate these studies to first-in-human trials of heart repair in several years.

Tissue Engineering
Tissue engineering is a new discipline that combines the worlds of cell biology, materials science and quantitative approaches to mathematical modeling and analyses typical of engineering. Our goals are threefold: 1) to create a ”patch” of contractile tissue ex vivo and implant this onto an infarcted heart for cardiac repair;  2) to understand the rules of tissue assembly, growth and development to make myocardium that is useful for drug screening or disease modeling; and 3) to use engineered heart tissues to model genetically based human heart muscle diseases.  Current approaches involve seeding cells onto synthetic, biodegradable scaffolds and utilizing a ”cells in gels” approach, where cells are seeded into hydrophilic gels containing microencapsulated growth factors and cytokines for timed release.

We are using human induced pluripotent stem cells (hiPSCs) obtained from patients with childhood- and adult-onset cardiomyopathies to study these genetically based diseases in vitro. We have developed single-cell and engineered heart tissue assays to assess contractile function and electrical function. A major goal is to promote the in vitro maturation of human cardiomyocytes such that they better reflect the physiology of the postnatal heart.